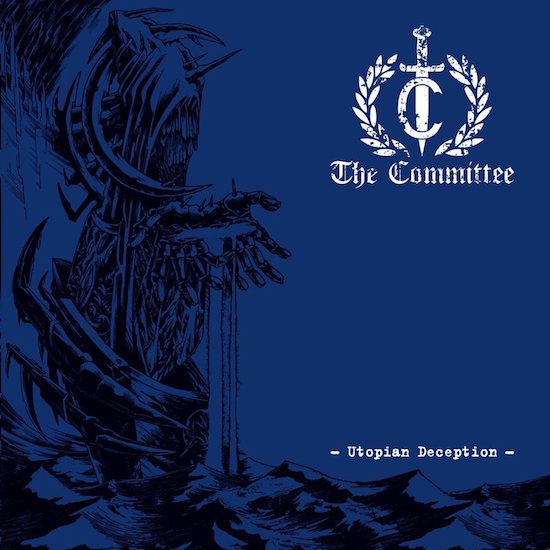 Formed in 2007, the international 4-piece sect of The Committee return with their third full length album, Utopian Deception. From what I could gather, the band is comprised of members from Netherlands, France, Hungary and Russia but, their facial identities and names remain hidden which adds as a feature that ties in well with the name of the group. This secretive sect has conspired to give the scavenging peasants an audial representation of where they currently are musically and ideologically.

From the first notes played on 'Awakening - Unimaginable', you could easily tell the band set out to deliver a musically profound piece. Their style of merging 2nd wave black metal with a melodic brush, ups the effect of the songs, giving them a bit more personality as far as emotional content goes. Some segments on the album sound melancholic such as the opening moments of 'Harrowing the Sane - Popularization' and 'Ashes - Norm'; then they are other times The Committee greets the listener with feelings of apprehension and even hostility as you would hear on 'Lexi-Con - Radical' with that machine-gun style of blast-beat drumming. Some listeners would be able to pick up on the Mgła influence in some of the guitar riffs' tones and structures ('Harrowing the Sane - Popularization') which was pleasing to hear. In fact, the songs give off a relatively strong Mgła vibe as far as its lyrical depth goes.

For someone who enjoys philosophical themes explored in black metal of this sort, it did not come as a surprise that I'd revisit songs such as 'Lexi-Con - Radical', 'Ossification - Law' and 'Harrowing the Sane' not for the instrumental appeal (as excellent as it is), rather for the lyrical content. The lyrics on Utopian Deception are a thing of sheer poetry and by now I could probably memorize some of the lines to 'Lexi-Con - Radical' and 'Ashes - Norm' due to them appearing to possess serious rationale and relevance. That speaks volumes for a record under the black metal moniker, as usually its the riffs and atmosphere that drive and draws in the listener/s attention. I think what transpires is that the atmosphere would take command of the music that would in-turn demand and gain the listener's attention that is then sustained by the lyrics. This makes me want to read through the album booklet, which is not something most listeners (I think) even care to do these days.

The music and lyrics gel excellently together. I remember anticipating the next vocal lines and instrumental notes to come for all the songs on the album. Not many albums can do that, and in this era we live in where people are more occupied with how deep you growl, scream and how fast a riff is played or how technical drumming can be, the attention to this feature is reminiscent of a time when records truly had relevancy and significance behind it. Utopian Deception is an intelligently crafted album that forces the listener to analyze and give deep introspect and thought about one's surroundings and the elements (whether beneficial or detrimental) at work within in those surroundings; something the sheeple express massive disdain for. Tailored for the thinking individual and should see the light of day May 29th, 2020 via Folter Records.