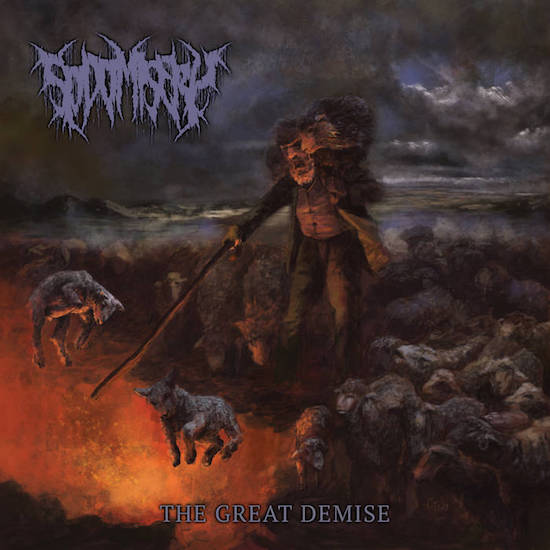 Buy on: Bandcamp
Type: Full-Length
Release Date: May 22nd, 2020
Label: Testimony Records
Genre: Black, Death
1 Reapers Key
2 Into The Cold
3 Sacrifice
4 The Messenger
5 In The Void
6 The Great Demise
7 Until They Burn
8 Arise
9 The Abyss
MetalBite on YouTube

I think I should do a little introduction here first. I heard about this band for the first time back in 2017 when they released a 3-track, self-titled EP. All of the sounds were really good and when I was trying to refresh my memory about it when preparing this review I remembered why it had grabbed my attention. First of all the band's logo has been created by Blakkheim from Katatonia. The line-up, apart from the band's leader Harris Sopovic, had Nephente from Netherbird on vocals, Niklas Sandin (Katatonia, LIK) on bass and Pär Johansson (currently guitars/vocals in Neuronaut, ex-Diabolical drummer) on drums. An EP was produced by Sverker Widgren (ex-Demonical, currently in Diabolical). And I think I was constantly checking out the Internet for the next 2 years and when I almost lost hope for the next release, 2020 suddenly gave me two singles - 'The Messenger' and 'Arise' and then finally the full album.

The band's line-up has changed over these 3 years, mostly because of Harris's decision to change it from studio-project to full-time band and the album has been recorded with Paul Viscolit on bass, Viktor Eklund (who used to be in Defueld, Lamia Antitheus, Life Eclipse, Shadows Past, Slavegrid and Smothered) on drums and Magnus Grönberg as a second guitarist. Sverker has been chosen to do the sound engineering again so basically the whole album has Stockholm stamp on it, no doubt.

Generally we can hear some echoes of Diabolical style, but it shouldn't be a surprise, not only because of Sverker's work, but also the fact that Harris used to tour with the band. Wing Studios is definitely good in making drums sound very good, creating a very spacious atmosphere with a bit of echo effect, guitars are heavy and Harris's growling also resembles Sverker's work in Diabolical, but mostly in lower registers. And that's probably where similarities end, the rest is obviously within the area of Stockholm scene, but it's definitely closer to traditional death metal with some black metal elements, too. It's very melodic, solos are very catchy and at least in my case they get stuck in my ears for very long.

All compositions have all elements that I love about Swedish melodic death and black metal - Viktor's legwork is very impressive, same with blast-beats in faster parts and there's plenty of cymbal-filled transitions from one tempo to another, with Paul's bassline following base drums precisely and leading the main melody line of the song when we get more solos. The riffs are also varied, we have some good old-school death metal stuff, but also chords that remind me of Vredehammer for example or Dissection (especially in 'Sacrifice' track), some more complex riffs even get close to finger-breaking ideas of Fractal Universe, which is a real treat. And shows that Harris's compositions can get pretty challenging and should look very impressive performed live. The growling is low, but most of the time you can get the lyrics with very little effort needed to understand them. The contents which also put this material more on the heavy side of the death metal spectrum - no clean vocals. We get some clean guitars though, for example in outro - 'The Abyss'.

To sum it up - I know it's their first full album, but these musicians have skills confirming their experience in previous bands, so no shortcomings on the workshop side. It's not as raw as LIK, but has more black metal elements than Diabolical. It's got that recognisable death metal vibe, with black metal bits that could be compared to aforementioned Vredehammer or Necrophobic or even some Dark Funeral compositions in the riffs department. So, if you were waiting for that full album since 2017 just like me - you won't be disappointed.