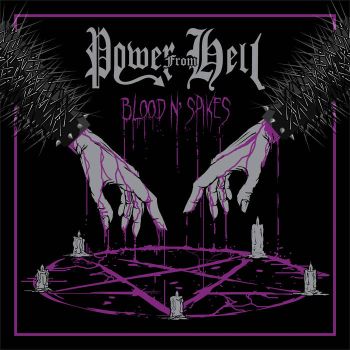 'Freewheel Burning' was the opener of Judas Priest's masterpiece "Defenders of the Faith" from January 1984. Almost 35 years later, Power from Hell play their version of this early speed/thrash classic and what can I say? Excellent selection, miserable execution. I miss the high-pitched screams and the charisma of Halford and even the music does not have this irresistible momentum of the original. That's pretty embarrassing in view of the technical possibilities of today, if I am not completely mistaken.

Let's try to forget this experiment gone wrong and have a look at their own material they feature on this well-designed vinyl (poster, lyric sheet). The delicately titled 'Hell's Gangbang' opens the gates wide to the realm of black thrash metal without chaotic sequences. Power from Hell are not known for unorthodox structures and they keep sticking to their guns. Almost primitively designed pieces with a more or less good flow and a minimum number of breaks form an EP which scores with homogeneity, integrity and power. 'Obscure Creation' has a great riff, a convincing chorus and a stormy solo, but the rebellious guitars of 'Altar of the Black Rites' also illustrate that the band has slightly increased its song-writing skills. Even though the songs stand in the tradition of the former releases, a certain new maturity shimmers through.

However, the Brazilian three-piece does not revolutionize its style, by far not. The malicious voice is still present, the vibes of early Venom are not missing and, as always, the production spreads the rotten stench of the underground. Given this situation, I regret that Blood 'n' Spikes clocks in at 21 minutes - a full album would have been great, because all of their own compositions ensure this pretty fine feeling of filthy fun that characterizes this bastard called black thrash metal. Power from Hell will never become the most exciting band of the universe, but they know their trade and I do not miss anything with the exception of the caught, bound and gagged girl that usually ornaments their artworks. But maybe she just could not bear this unworthy version of Priest's monument.