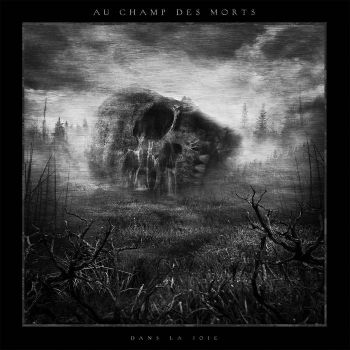 France became the epicenter of mellow and introspective black metal after the release of Alcest’s debut album "Souvenir D’un Autre Monde" in 2007. Many bands followed suit by continuing the trend of playing highly reverberated guitar riffs and creating an ethereal wall of sound that would paradoxically give out feelings of longing and melancholy. This subgenre, known today as blackgaze, went through many twists and turns as each would adapt the subgenre to its own needs by incorporating elements of post-rock, shoegaze, indie rock and even hardcore punk. While bands may differ musically, thematically blackgaze has always been about seeing hope and beauty within the raw and dissonant roots of black metal.

The album Dans La Joie from Au Champ Des Morts is undoubtedly influenced by this blackgaze subgenre as paradoxical themes of despair and nostalgia are at the forefront of the record. In fact, the lyrical theme of the record approaches how to deal with the aftermath of grand scale destruction caused by war. The title of the album translated from French implies ironically that one must go through it in joy.

As such, the album represents this struggle of staying calm and neutral while witnessing the destruction of what was once a cherished and familiar. Musically this is expressed through the clean vocals present throughout the whole album. Each song has the chants start off cold and emotionless but slowly increases in both volume and tone to a point where we end up with screams of anguish and despair. The rather ironic ending of the song 'Dans La Joie' portrays this phenomenon quite beautifully where the lyrics (translated) mentions "and soon everything will end; in joy and light, in joy; in joy". This repetition gives up a feeling of irony as what was initially expressed as hope and longing ends up expressing doubt and despair. The song 'L’étoile Du Matin' is the best song to witness this change in emotion from cold and calm to anguish and despair.

While most of the song serve theatrical purposes, I am left wondering what was the objective behind the song 'Contempler L’abîme'. Most songs will have a black metal backbone with blackgaze and post metal inclinations. 'Comtempler L’abîme' with its heavy shoegaze influences and major chords gives off a An Autumn for Crippled Children vibe. It appears to contradict the narrative, lyrical themes of the album and even the title translated to contemplate the abyss seems out of place. Perhaps this can be considered as an experiment.

Another point of contention on the album would be the way in which the song 'Dans La Joie' ends. While I tend not to be too nitpicky in terms of recording, I’m left wandering if the last seconds are the result of a mixing error. The song follows a decrescendo by introducing a cleaned guitar that follows the tremolo picked melody present during the last minute of the song. Instead of naturally decreasing the sound of this riff, it cuts abruptly at exactly 9:57 minutes, as though they had a 10 minute mark to respect.

The album is certainly an interesting experiment and I would recommend this to anyone interested in seeing what some black metal artists are doing at the edge of the style. While some members of the bands are veterans of the scene (such as Stéphane Bayne, guitarist for Anorexia Nervosa), the project still feels green and so with a bit more maturity I am confident Au Champ Des Morts could produce a masterpiece.