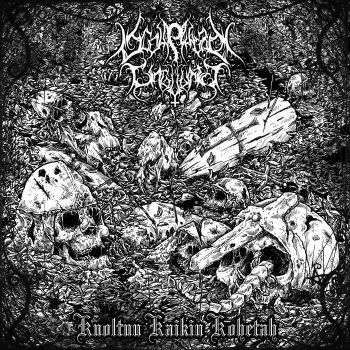 Kazakhstan is by no means one of the most known metal scenes, so it was a nice surprise to have Scolopendra Cingulata’s EP in my hands. The band was founded in 2013 by Andrey Kozlov, who plays in this band under the nickname ‘SS’. The project was initially a one-man band, though shortly the lineup was completed with several new members. This line-up has continued almost unchanged with the solo exception of Jurinimus, who left the band some time ago. Scolopendra Cingulata’s first years were reasonably active with the release of several demos and splits and the subsequent creation of the EP I am going to review. From the 2016 onwards the band has remained quiet, so the re-release of the 2015’s EP is a good excuse to discover what short of music these guys make.

Only few months ago the EP Kuoltuu Kaikin Kohetah was re-released by Careless Records as a nice digipack, which comes with some bonus tracks. Those tracks are originally part of their earlier demos and show Scolopendra Cingulata's first and most primitive sound, firmly rooted in the raw black metal genre. There are also two unlisted tracks, which sound slightly more similar to the newer stuff. Anyway, the most interesting part of this EP is to focus on the new tracks, though the old ones are a nice source to see how the project has developed in a quite short time. Kuoltuu Kaikin Kohetah contains four new tracks, which still sound undoubtedly pure raw back metal, as the ones released in the first demos. But these new tracks show a slight evolution in small but important details. Firstly, the production though raw has a more powerful sound in comparison to the first demos and tough is far from being clear and 100% distinguishable, it allows to distinguish the instruments much better. The new songs sound stronger and heavier thanks to a more appropriate production. Musically speaking the band is far from being a classical close minded raw black metal project, as I had initially thought when I raw a first description of the band's sound.

One of the aspects which caught me by surprise was the use of keys. The band has in fact a permanent keyboard player, which is an interesting detail. Those keys don't play a major role, as they are an extra resource to add some atmosphere in the commonly aggressive and straightforward compositions. Anyway, their use is a welcome addition, which enriches the songs and gives an extra point of variety and ambience. A fine example is the opening track ‘Помрут - Все Хорошими Станут’ (Everyone Becomes Good After Death), where those keys have a very nice section in form of an interlude, which serves a bridge between two well differentiated parts. The song itself is a great example of black metal full of aggressively, with Andrey's vicious and devilish vocals and quite well written guitar lines, which are quite aggressive, but still retain a little sense of melody. Pace wise the track is fast, though flows naturally through mid-tempo sections and the aforementioned faster ones. The next tracks don't differ too much, though the third track has an even darker tone and a slower pace. This song has another ambience interlude, with some battle sounds accompanied by melodic and calm guitar chords. As it happens with the keys, which are used in different tracks of this EP, these tranquil guitars help to increase the melody and atmosphere of the song.

All in all, Scolopendra Cingulata shows us with this EP that successfully tries to escape from the restricted laws of the raw black metal scene, adding some nice touches here and there, which enrich the band’s music. Hopefully, a future full-length should reinforce the balance between the expected and enjoyable rawness, and a reasonable increase in the use of keys and melodic guitars.

Scolopendra Cingulata's Kuoltuu Kaikin Kohetah is one of those weird black metal bands that I don't know if they are being self-aware or not about how funny they sound in their delivery, composition and specially vocals. Don't get me wrong as this doesn't have to be something bad, Immortal have made a career and recognizable sound out of it and in this case its similar in that aspect (at least to me). The musical direction has a lot of DSBM and classic second wave black metal sound to it, with parts that reminds a lot of (instrumentally) Bethlehem's "Dictius te Necare", Mayhem "DMDS", Darkthrone and Burzum. Vocally has a lot of the Donald duck style of Maniac on his later years, but manages to stand on its own and keep exciting the music played as is actually fun to listen if not taken so seriously.

One of the things I've noticed listening and paying attention this album, is first to hope the album title Kuoltuu Kaikin Kohetah (KKK... ups) and the vocalist pseudonym SS (double ups..) are a mere coincidence, and second that this band has a lot of borrowed/similar riffs that I can even point out which songs they were taken off. Starting off with 'Помрут - Все Хорошими Станут' whose chorus reminds me a lot of (without being equal to) 'Buried by Time and Dust' by Mayhem, then switching to the drum beat of 'Schatten aus der Alexander Welt' by Bethlehem, and then a bit of Darkthrone's "Transylvanian Hunger" there. In no way this sounds like a copycat as it has its own reasons why this is played and not a collage of old riffs put together. The song is interesting by its own merits composition wise but I can't help to point out on this track and the following ones.

The sound of this band manages to converge all this elements from other older bands and does it interesting anyway, which is harder than being creative and causing the same. Black metal as a genre has been repeated through the same message and passages, and few bands can innovate and create something new and interesting without repeating the formula. This band in the other hand, is an homage to those previous innovators, and has fun doing so and so I do listening to them. It's no masterpiece, nor mediocre, but above average and a blast to listen, with parts that manage to make an original sound of its own (in short parts) like the best song 'Ветер Войны', specially on the end part of this song.

'Шакалы', is really similar to Burzum, or at least their more slow paced songs, which again does not plagiarize, but rather brings the listener to a nostalgic trip to those early raw black metal bands, with much better production, without over doing so in that regard. In contrast with this 'Меч Смерти Клеймор' manages to do the opposite, and what could be the focus of this band onward, an original sounding song that still is interesting and shows the real original style of this band.

Scolopendra Cingulata is the scientific name of a veracious centipede, and fits well this band, manages to catch with each leg something from someone but makes it its own, creating this awesome EP that can recommend without any doubt!

Scolopendra Cingulata play a traditional style of raw black metal with a strong Norwegian influence, even if the band hails from Kazakhstan. The vocals are long high-pitched shrieks, screams of deep emotional pain and desperation; I’m not familiar with this language but the vocalization they use isn’t very segmented. The string department is formed by two guitars and a bass, the leads aren’t very technical and consist on melodies and the rhythmic guitar relies mainly on open power chords or the main riffs. The riffing is pretty simple and monochromatic, but it isn’t boring because the principal themes are strong and interesting enough for the ears. I have to admit that composition wise the album is kind of monotone but there are some variations; one super heavy mid-tempo break with a bluesy Black Sabbath shape on the fourth track, and a slower breakdown to finish the last song before the outro, that has more of a death/doom look and was even heavier.

The bass guitar goes along with the riffs and the bass drum, nothing special but it’s always present on the mix and serves its purpose correctly. The drum kit doesn’t sound like today's top-tier death metal drummers at all, there is just one song with a double bass drum part. The tuning of the drums itself isn’t very metal at all, it sounds more like a soft rock kit; this style of drumming is common in this genre and even if the combination of black metal elements and this type of drumming is weird at first, that odd sounding result actually enhances and fits the music well. The overall depressing atmosphere and the drumming reminded me a lot of Forgotten Woods but the faster parts have the same level of belligerence displayed on classics like "De Mysteriis Dom Sathanas", except for the drumming featured here that is less fierce compared to Hellhammer. The third track feature a clean guitar section with arpeggios, neatly done. Even if the music of the band is formulaic, it was gracefully arranged and executed.

I'm not a fan of keyboards on any heavy metal subgenre but in this album they weren’t overused and the synths had nice lazier distortions, not virtual medieval string skins that sound super cheesy. There are some melodies played just on the keys that sound very cold and dismal. The production is very crude and polished, but everything is perfectly timed and in tune, I like it a lot… you could say it is perfect for this genre. The first four tracks consist of an EP released in 2015 and the final five tracks are bonuses from the demos released one year before, these feature an even rawer production as you can expect from a demo, but everything sounds legible and is as enjoyable as the first tracks. In some way you have a nice compilation of the band’s early works and almost their entire catalogue here.