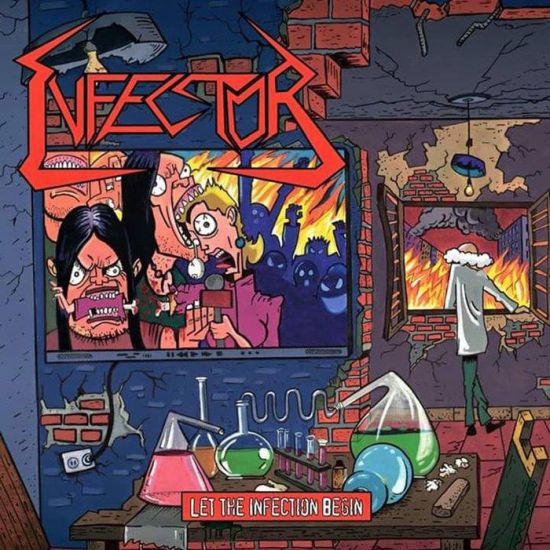 Thrash metal is perhaps the most easily identified and replicated form of metal; its near impossible to get it wrong. For years the formula has remained very much the same, even with the addition of other sub-genres to make it interesting; the sound and just overall way it goes about business is too obvious and easily stagnates. Knowing this, how many of us would be interested, heck even excited to check out the next thrash metal band newly formed? I can't speak for anyone but for me it usually comes as a chore doing so. Like having oats and milk after a hard day's work, it's by no means an exciting meal, but it manages to provide just enough strength to keep you going for the next day. However, there are times in which even the most common of meals would bring a delight you'd get form one prepared only for a special occasion; I'm talking about Infector (Cuba) with their debut full length album Let the Infection Begin. From a distance, it's old school thrash metal, which is by no means a bad thing; however when the riffs and solos hit, you get an understanding as to how a common dish prepared by a South American nation (Cuba) in this case, can be a bit of an event.

Comprised of three thrashers, Jose, Fabio and Franh, puting their heads and hands together to concoct a riff heavy ode to the mid-80s of thrash metal that saw rise of bands like Kreator and Sepultura. Here on Let the Infection Begin, the call to quality is answered on its 34-minute run time. Being such a young band, one could not have expected the music to be this good and even knocks down albums by better known bands in the sub-genre. Nine (9) tracks that don't feel like 9 tracks, instead one 15-minute song filled to the rim with fabulous riffs, believable thrash metal vocals and a good display of old school thrash metal drum-work. 'Shrine of Desperation' is the setup and while you'd feel accustomed to what's offered here, with progression, Infector begin to add that South American spice that has made thrash metal so loved in these parts. 'Deranged' truly is where the band begins to up things or let the infection begin as they put it, dishing out headbanging goodness of their own while borrowing some traits from Suicidal Angels and bands the like of.

Speeding through to the end on previously mentioned 'Deranged', with 'Blind Faith' and 'Fallout of Mankind', the unit covers the more essential parts of thrash metal the dedicated listener is always in search of. Meeting the criteria of competent riffing, in fact very impressive soloing (the main highlight of the album), steady handed drumming with plausible transitions, fills and speed, plus a fitting vocal display bringing out some of that Cuban accent charm giving the record a genuine feel. Though good songs, I think their best work is envisioned on 'The Void of Consciousness' which they drop the tempo and display a discresion in providing adequate room for the solo guitar work to take effect to give the track the feeling a song should have. Same goes for 'Poser' that'd momentarily lower the tempo before going full throttle once again into speed metal territory and back featuring solos that feel like extensions of the leading riff.

This has been done a million times over, but there's something refreshing about hearing it done well in a time that has a lot of revivalism occurring in metal. Let the Infection Begin is a commendable debut for such a young thrash metal band but the question remains how long they can keep that up for given the genre's repetitive nature.