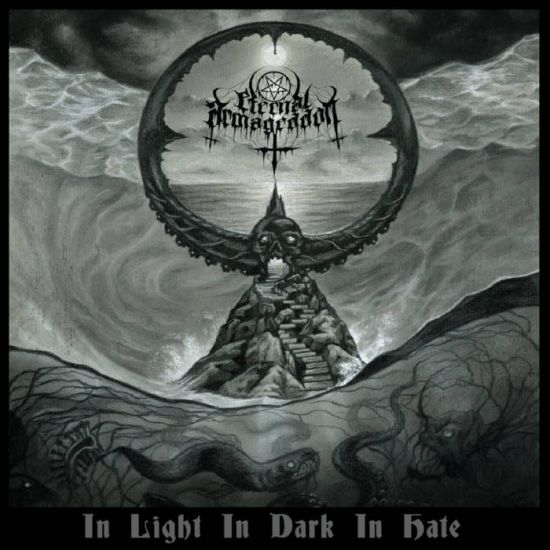 Germany is said to be densely populated in view of 232 inhabitants per square kilometre. But if this statement is true, how can we describe Bangladesh with its 1.117 inhabitants in the aforementioned area? Totally overcrowded, but still comfortable in comparison with Singapore (7.842 inhabitants)? Either way, I am happy to know that there is still enough room in Headbangladesh for three dudes to unpack their guitars and drums and play metal. Eternal Armageddon offer 'In Light in Dark in Hate' and I add "in Love", because this album tells me in a matter of minutes that metal will always have a place in my heart. But I should stop this romantic drivel, because here comes a portion of nicely shaped vulgarities. The trio from the capital of its country performs blackened thrash metal with vocals that cross nagging with barking. Isn't it nice to hear how the lead vocalist spreads the raw charm of a biting dog that has sunk its teeth into your fibula, deep enough that your bone is affected? This dude is in a bad mood and he sees no sense in hiding his mental condition, although he rarely contributes narrative elements. However, a formidable performance.

Yet even more interesting is the musical approach. The promo sheet promises the album "transports an individual to a different height of spirituality and intellectual freedom";. Honestly speaking: no. However, I am not resentful, because Eternal Armageddon's music is accessible, but it cannot be blamed for stupidity. The protagonists find the right way between the confusing territory of complexity and the uncluttered fields of straightness. Well, don't shy away in view of the word "complexity". Please keep in mind that we are talking about devilish black thrash, the subgenre where filth generally counts more than high sophisticated song structures. By the way, speaking of filth, I must say that only the lead singer worries about this element. The guitars do not sound overly clean, but they rather spread an aroma like those on a pure thrash album. So what? In combination with the vocals, the overall sound of the material creates a malicious undertone. I like it – and I like that the band starts the album immediately without any intro. Of course, the world has seen some really great openings ("Hell Awaits"!), but usually black thrash was invented to deliver a kick into the pit of the stomach without any superfluous fuss. Fortunately, Eternal Armageddon are aware of this and with the exception of the slightly weaker 'No Lord Above', they are able to transform this guideline into musical feats.

The 33 minutes indicate a compact format and indeed, the songs avoid excessive excursions that make the guitarist's mom happy and everybody else fall asleep. From the spontaneous beginning until the fantastic closer (pay attention to the simple yet outstanding chorus), the output is filled to the brim with vehement, fierce and sharp outbursts. Even though Eternal Armageddon are already active for more than a decade, they operate with this kind of amazing impetuosity which seems to be the privilege of debutants. The dudes wallow in their own riffs and their joy of playing is infectious. Of course, this sounds ambivalent in times of the Corona virus, but here it is meant absolutely positive (nevertheless, I was perplexed to see that the album was recorded at Coronach (!) studios). Let's see whether or not this album will stand the test of time. It has more substance than the more or less comparable here-we-come-here-we-go works of Toxic Holocaust, but I am not yet sure about its long-time effect. On the other hand: who cares? Life happens right here, right now and this trio from South East Asia has given me a lot of good feelings today. I just regret that this seems to be another shitty digital-only release. Lads, can you hear me? Want to send my cash to banging Bangladesh. And maybe the remaining 231 inhabitants within the square kilometre I live want to do the same.