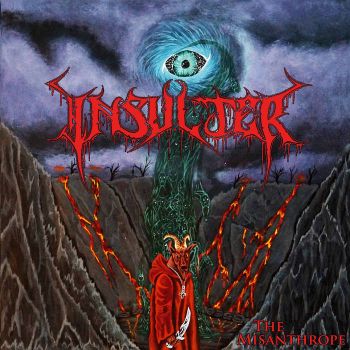 Some albums are old school, but some are older. Maybe not as old as time itself, but truly old. Insulter’s The Misanthrope ignores every form of musical evolution of the last 35 years and it loves to present itself in an equally antique sounding frame. This mix of early Kreator and surprisingly competent Darkness has nothing that makes it chic or stylish. Equipped with a dull sound, the four dudes from the overslept hotspot Friedrichsdorf rumble through the Taunus, Hessian’s nice low mountain range. Staying with the metaphor, they do not reach the top of the Feldberg which is the highest elevation there, but they show some climbing skills while mixing elements of the unholy trinity of black, speed and thrash metal.

The album does not advance into new dimensions of velocity. It’s a “Pleasure to Kill” rip-off with a more comfortable speed. Well, rip-off sounds pretty negative, doesn’t it? The output makes fun and is charming in its stubborn backward movement. The well-hung riffing reflects the integrity of the band members. Nevertheless, let’s see the truth in the eye: even if this album would have been released in the mid-eighties of the last millennium, it would not have triggered a collective excitement. I miss the final punch, the extra portion of energy, that now-or-never attitude that can make pounding thrash works to something special. Okay, especially the first regular tracks, 'Legion’s Lust' and 'Zombie Forces' do not lack pressure and cruelty, but already the solo part of the song about the legion sounds amateurish and incoherent.

Don’t expect any form of stylish experiments or surprising twists and turns. Only the intro of 'Past Rituals of the Misanthrope' smells a bit of Bulldozer’s “The Day of Wrath” (but that’s still very close to “Pleasure to Kill”). The dark and sinister approach is omnipresent and songs like 'Horny Necromaniac' open the next chapter in the encyclopedia of primitive, stomping choruses. All these songs are not bad, but it’s an ironic twist of fate: the dudes do not work with many breaks, but if they do so, it often happens that they destroy the strength of the respective track – not completely, but to a certain extent. Maybe this is a sure indication that the song-writing skills leave room for improvement. And there is another element I am missing. The entire material lacks intensity. Maybe my nerves are dulled, but neither the compositions nor the pretty flat sound of the album’s second half fascinates me. Indeed, the combo is running out of breath and (old) ideas - and the closer reminds me of the last song on Allegiance's debut, but that's surely just a coincidence. However, it’s an album which does not stink, but I fear it won’t see my CD player from the inside many times. So, what is older than old school? Right, old kindergarten. By the way, I visited one in the neighborhood of Friedrichsdorf, but I don’t think that this fact makes this album better.