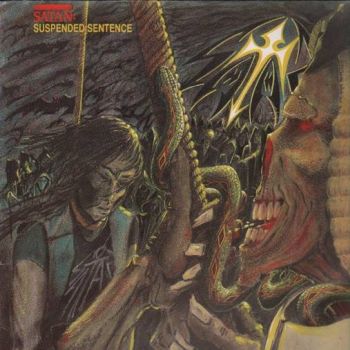 Back in the eighties, Satan (the guys with the worst marketing department of the entire metal history) were either recording an album (exception) or changing their name (rule). This was a pity, because this self-initiated confusion surely had a negative effect on the career options of the band. And this was the next pity, because Satan had the competence to pen pretty traditional yet highly exciting tracks. 'Suicidal Justice', for example, begins somewhat irritating with six high-pitched staccato screams, but it grows constantly and reaches its intense climax with a part that sets in after the repeated statement “We will be Gods”. The double-bass driven sequence opens Pandora’s box and injustice, desperation and resistance become tangible. Despite its length of seven and a half minutes the song does not lack accessibility. Its flow is almost perfect, the band plays very tight together and everything is well balanced between user-friendly catchiness and musical complexity.

In a world of thrashers and posers, Satan were able to evade the black / white categorization. Their songs did not lack heaviness, they were not made for the big radio stations and even the (for traditionalists) mandatory semi-ballad did not fall prey to its own kitsch. 'Avalanche of a Million Hearts' has an authentic and dark undertone – how could it be otherwise in view of the lyrics that deal with a well-known historic crime? Michael Jackson sounds empathic, the song gains intensity during its eight minutes and the guitar work creates sad melodies and mirrors maturity. Instinctively, the band gives this piece enough space to develop its very own flair and both the soft beginning and the stormy main part hit the bull’s eye. Only the “ahaha” background vocals leave an ambivalent impression, but let’s forget this nuance.

In general, the (Graeme) English combo performs the traditional form of metal in a very powerful way. Melodies are not forbidden, but a certain weakness for up-tempo rhythms lend the material a pretty harsh appearance. Moreover, this is definitely no fast food metal. Yes, the listener does not need a cryptographic key in order to decode the song patterns, but nearly each and every track relies on a very stable substance. Only 'Calculated Execution (Driller Killer)' starts and ends flat without any kind of significant growth between these poles. It’s much more fun to listen to songs like 'Who Dies Wins' with its thundering drums at the beginning, the coherent verses, the dramatic chorus and the excellent mid-part after the second chorus including a brilliant solo. Of course, the lyrics also add value to the opener, because Jackson sings about the Kamikaze fighters – the fate of these young men still makes me shiver. Satan delivers in any respect. '11th Commandment' is another proof that the guys know how to design a song. It begins almost cautiously, but it presents many layers and a high degree of density during its almost ungenerous playtime of 4:49 minutes.

Suspended Sentence never got the attention it should have got. Perhaps the formation fell victim to the odor of normality that surrounded most NWOBHM bands – not to mention their compulsive name-changing once again. But one thing is for sure, the compositional skills of the dudes were beyond doubt and the album’s state-of-the-art mix also was no showstopper. Given this situation, many metal maniacs should lend an ear to this little classic. It’s almost impossible to hate the output due to its metallic pureness, but there are a lot of reasons to enjoy it.