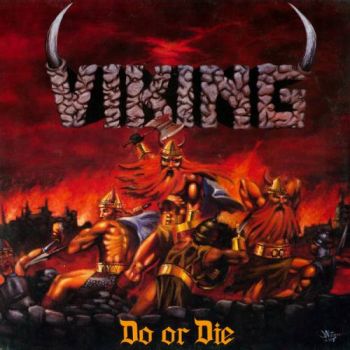 Do or Die - I am sure that the cheeky guys of Viking faced all professional sound engineers in their neighborhood with these two alternatives. Well, each and every engineer decided to die instead of doing the job. In other words, the production of this debut constitutes its biggest defect. Everything sounds undifferentiated, unbalanced and sticky. Make an experiment and buy the first demo of a random newcomer band that consists of a semi-professional guitarist, his dog (vocals) and a cheap drum computer. I bet that it will have a better production than the nine songs of Do or Die. Either way, as a consequence of the sound engineer's mass suicide, the band members themselves had to produce the album and they raped their own material rigorously. I nearly admire the destructive force of the band in view of the fact that Brian Slagel was the executive producer. But thrash metal is no high gloss event and therefore this technical implementation is not the death sentence for Viking's first work. It's just a pity that the compositions have no chance to shine in full bloom.

Viking do not play the most technical sort of thrash (or it is not possible to identify their dexterous tricks in view of the muddy mix). No doubt, Do or Die did not capture the spirit of classic thrash. Precisely working bands like Forbidden offer fine details, but the gang from Los Angeles prefers a rather massive approach. The result is a headbanging session of the wilder kind. The boring 'Prelude' to the rather weak 'Scavenger' and the blatantly simple intro to 'Killer Unleashed' are the only occasions to pause for breath. Speaking of 'Killer Unleashed', this song explodes after the intro in a great manner. The verses are based on strict hammering and fantastic leads, the fiery chorus possesses earworm qualities and the solo obeys the Gods of thunder as well. No doubt, this rapid outburst belongs to the best tracks - and did I already say that its intro is not only primitive, but effective as well?

Viking are able to present some catchy sections, for example the chorus of the title track or that of the furious 'Militia of Death'. This is surprising, because in general, the band does not provide any kind of extraordinary ingredients. The vocals have a little intersection with those of Don Doty and are generic (angry, not very harmonic, reckless). The music is generic as well (impetuous, vehement, straight) and the "Reign in Blood"-like solos also do not create a unique feature. From this follows that everybody who listens to this work will understand the reasons why this album did not become a milestone in the history of thrash. Anyhow, Viking have energy, a natural grasp for good riffs and an adequate, non-commercial attitude. Okay, vehemence seems to be more important than compositional abilities, but the majority of the songs lies between solid and very good. In short, there is no reason to follow the sound engineers. Don't kill yourself if you do not possess this work! Nevertheless, if there is a chance to get it, feel free to open your wallet.