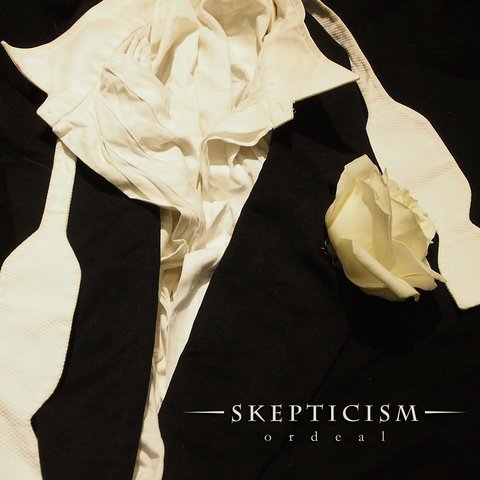 So. Here it begins. My all-time favorite band releasing 7 years’ worth of material that is barely accessible. I'll have you know, I'm 17 now, and the band has been my favorite since I was 12 or 13, ever since Alloy, I have been patiently awaiting the day of their next album. And it is finally here, for my listening pleasure. Pleasure may be too strong a word however.

Let us start from the very beginning. Stormcrowfleet, my favorite of theirs, is easily the best funeral doom album ever made. You can feel the pulsation of this LP. The very bone shattering stillness and minimalism in the record is as powerful as death itself. Lead & Aether was very good as well but lacking the bass atmosphere that Stormcrowfleet had. Weaker but still astounding. Next, Farmakon, my second favorite album from the band. This is a good change in direction. This is how a band should progress. Frightening chord progressions and the overall atmosphere of fear is present. Alloy comes around, and it sounds a little too polished in my humble opinion. I thought to myself...I hope Skepticism, a band so near and dear to me, doesn't release another album like that...

Some of the songs, like in 'Momentary' and 'The Road' sound like they're trying too hard to be doom. Matti used to sound so good when all he did was whisper growl instead of belching. The idea is that vocals create atmosphere, but here they dominate. It's not for the best either. Ideally, Skepticism tried to release the most "crushing" doom ever. If I wanted crushing, I'd go to Tyranny's new release. If I wanted heart breaking, I'd go to Shape Of Despair's new album (which gets AOTY for me). The entire album flows well, but with mediocre songs. It's like eating a 5-course dinner with each entrée being extremely bland food. Nothing stands out, but it goes together well. Hors Oeuvres then entrée then wine, then coffee then dessert. Everything is in a tidy order. But the food tastes like shit. The end of 'You' flows right into 'Momentary' quite well. But, in all, the songs are mediocre at best.

So I have been wronged again. Ordeal, an album I waited an eternity for, almost half my life for. And let me say first and foremost, this is a good doom album, but it is not a good Skepticism album. I pity it. The promo track, 'The Departure', tries to be menacing and crushing, when the keys are in fact, weaker than ever. There are saving moments, however. The rerecorded tracks, 'Pouring' and 'The March And The Stream' are phenomenally done. The keys really shine here, but if they just used those ideas on the rest of the album, it would be a tier with Stormcrowfleet. That I can say.

The highlights of this album are the songs, 'Closing Music' and the 2015 recording of 'Pouring'. The new recording of the 1995 classic song is indeed the highlight of the LP. It makes me wonder, as I listen to the plodding keys and atmosphere of that song, if they should re-record the entire Stormcrowfleet.

I'm an organist myself, which gave me my love for this band, but the organ, I feel, has gotten a lot weaker overtime. I feel as if the keys, which were what the songs were written upon in the past, have taken a step down, and the guitar shines sully over the rest. Not to mention the band has 2 guitarists now, so things were bound to change. Skepticism is not a riff-based band. They are organ based. Having two guitarists only makes shit worse.

All in all, the live performance experiment works with this record, but the new songs don't. They show almost no atmosphere, compared to the monolith of Stormcrowfleet. It physically pains me to write this review because Skepticism is, again, my favorite band. But you know, with an album that has very little substance, and more commercial ideas, it has to be rated low. And what really sucks, is that, looking at the span of albums that Skepticism has released since '91, they have an average of 5-6 years between them. So, come 2020, come by silent wings, so I can finally appreciate this band again.