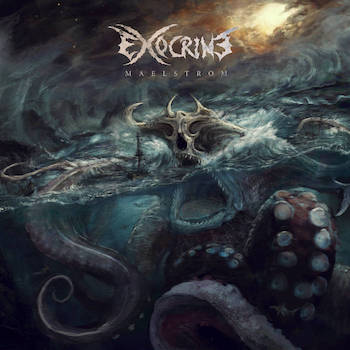 Since their inception in 2013, Exocrine has been extremely active. In the 8 years since their formation, this would be the fourth album they've put out. For technical death metal, that's a lot of releases for less than a decade when you consider most bands take anywhere from 3-5 years on average per album. This raises an eyebrow for the quality of their albums in my book. I have not listened to the previous three albums even one time, but when this was released I decided to check it out. This band doesn't receive much publicity; despite the quantity of albums and the fact that they're signed to Unique Leader Records, I don't see many people talking about Exocrine. And after listening to this album, I'm really confused as to why that is. This is excellent technical death metal that deserves more attention.

Alright, let's get the obvious out of the way - this is FAST. Like, really fast. Fans of bands such as Archspire and Cytotoxin will feel at home with the ludicrously quick blast beats and shockingly tight riffage played over the blasting. There's sweeps aplenty here as well, as these Frenchmen are clearly all masters of their respective instruments. Some other bands worth referencing are The Zenith Passage and perhaps fellow country mates Henker, for those of you who really know their tech death. With that palate of bands to refer to, the music should speak for itself; fast winded songs with a good atmosphere, weaving through multiple complex parts to create a basket full of great songs that are worth revisiting. There's some breaks in certain songs to allow the listener a breather from the madness, including a… trumpet?

Alright, we've all heard of the saxophone in technical death metal. That seems to be the new hip thing that every band wants to add into their music. But a trumpet is a unique choice, and it's not exactly intertwined into the tech death itself, rather it comes in and plays a soothing sound when all the music behind it stops. These are the breathing moments they give to the listener and they're actually really cool. I'm not too familiar with the trumpet in other music, but it sounds good as fuck here and I'm glad they added it. It definitely gives them something that separates them from other bands in their genre.

The riffs are great on this album. In case I haven't said it already, they're all lightning fast and technical, but they're catchy and memorable. The riffs are what remind me the most of Archspire, and that peaks when they slow it down a bit for a groovier riff that could make even a non metalhead start to move their head up and down. The lead guitars are great too, probably even better. A lot of the leads remind me of The Zenith Passage debut we got in 2016. They're littered in every song and there's a dozen good ones to pick out just off the top of my head. The songs themselves are of course fucking dominant. They flow very well and don't ever get too crazily structured, and they do keep defined choruses and verses so that they don't lose the average listener too quickly. Another quirk that reminds me of Archspire and Cytotoxin, something very few bands have been able to execute as well as those two.

The vocals are actually pretty dynamic as well. This guy has good pig squeals to compliment his angry sounding death growls. Not often do you hear pig squeals in this kind of music, but they make it work perfectly. There's little black metal shrieks on the album which is definitely disappointing, but oh well, the rest of the vocal department is fine. He goes pretty fast at times too which I appreciate.

Exocrine are firing on all cylinders on their fourth album Maelstrom. If this band is still not on your radar, better get it on now, my friend. Any fans of technical death metal will enjoy Exocrine, they have something for everyone in the subgenre and keep it 100% tech/prog the whole time. They bludgeon you with frantic riffing and mesmerizing leads and wrap it all up in a package that's easy to digest, but far from diluted or dull. How this band doesn't have more reviews on their page, I don't know. Superb tech.