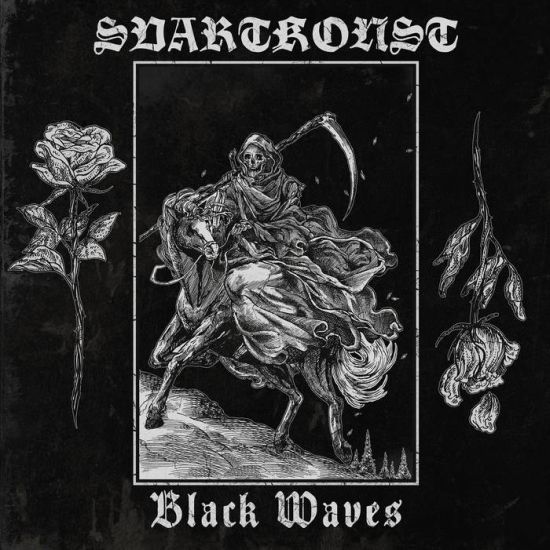 Sweden is known and beloved for having much varied and diverse metal scene, ranging through various styles and genres. Into this pantheon enters Svarkonst, the brain child of Rickard Törnqvist, playing what he describes as “One-man HM-2 driven blackened death metal”. After two years since his roaring debut Devil’s Blood, he now gives his sophomore album Black Waves to the world.

Many people have pointed out that when it comes to “blackened death metal”, the bands that play this style ultimately tend to lean towards one side over the other, and some of them end up sounding like standard black metal but with guttural vocals instead of the usual black metal shrieking. What makes Svartkonst different (in a good way) is how Törnqvist has managed to perfectly marry old school Swedish death metal (the “HM-2” he uses to describe his style of music is a reference to the Boss HM-2 distortion pedal used by pioneering Swedish bands like Entombed and Grave) complete with the signature fuzz and distortion and the atmosphere and aggression of Swedish black metal. Törnqvist in this second opus has completely refined and polished his style to near perfection, keeping the best elements of both black and death metal, trimming the fat of both genres and keeping it simple and focused.

While the first album was an admirable effort and it did present a good balance of both subgenres, it was a bit rough around the edges as well as kind of unfocused as if all the songs where done individually and then put together into the album. On Black Waves, Törnqvist’s music is consistent and focused. This is the kind of album you experience from beginning to end, but at the same time, the singles that were released to promote the album show that each song can stand on its own. It’s like the lions from Voltron. Each lion is strong on its own but together they are even stronger. As described by Törnqvist, the key ingredient in his music is the HM-2 distortion that’s a fixture of Swedish death metal, and indeed the guitars are what take center stage. What’s impressive is how Törnqvist uses the signature distortion to enrich his guitar playing and this album is more sprawling and dynamic that its predecessor Devil’s Blood. There’s a stronger sense on atmosphere and melodies to complement the aggression, there are also some noteworthy and impressive solos, courtesy of guest musician Marcus Wiklund on the 2 longest tracks which are also the best songs in the album and display all of Törnqvist’s skills on his guitar and bass. The other major standout performance are Törnqvist’s outstanding vocals. He employs guttural roars that would work perfectly for either black or death metal but in here they are at their strongest.

The rest of the instrumentation is also equally good. The drums are as authentic and expertly played as both death and black metal require. Unlike the debut album where Törnqvist did everything (from the instrumentation to the recording), in here he has the help from some truly great musicians. I already mentioned Marcus Wiklund’s (of Ulfven fame) masterful lead guitar work, but also the contribution of drummer Henrik Almgren who shared his duties with Törnqvist, and rounding the lineup are the backing vocals of Daniel Brundin (also of Ulfven) on 4 tracks, he excels in giving the music’s atmosphere that extra layer of sonic evil.

Overall Svartkonst is one of the better blackened death metal bands to come out recently, proving that both subgenres can be mixed together without feeling disjointed or neglecting one style in favor of the other. All brought together by Rickard Törnqvist’s expert production. The man has the goods to make this band truly great and with 2 exceptional albums in his back catalogue I’d say: remember the name Svartkonst.