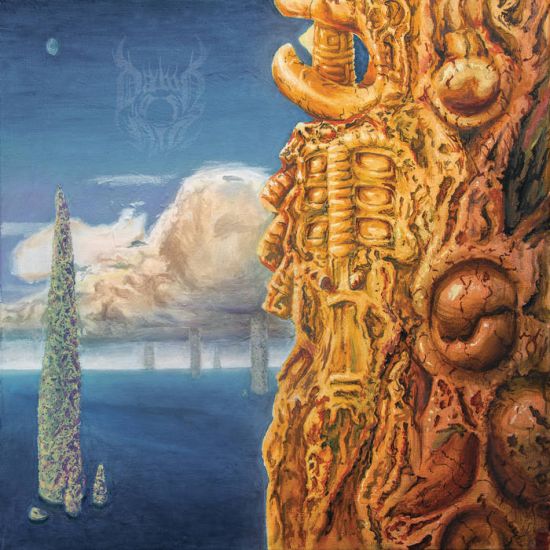 While there's occasional reference points you can make for Dawn of Nil - a dash of Mithras here, a pinch of Vektor there - the riffing style on Culminating Ruins is very distinct. It's very technical, constantly shapeshifting, a bit obtuse and dissonant, but Vincent Laugier also adds a lot of really spacious, melodic leads (most of my Mithras comparisons are based on them) that strip the music of a lot of the aggression and dread. The atmosphere it evokes is very much its own thing, which is kind of hard to put into words - where a lot of comparable bands go for a sound that signals an inevitable and imminent end, like a spacecraft exploding and leaving you to wither in the vacuum of space, Dawn of Nil sounds very lively. It doesn't sound like the spacecraft exploded at all, it more just sounds like you took a wrong turn and ended up on a planet that kind of seems like home at first, but then you realize something isn't right. All the architecture looks completely different than anything you’ve seen, the terrain has all sorts of weird colors... you're scared, but you're also oddly fascinated and curious at the same time. You want to examine the strange, alien character of Culminating Ruin as much as you want to run away from it.

While the detail in the guitars tells me that it's Laugier's dominant instrument, the drums are impressive enough on their own. If they're programmed, they're given a level of detail and realism not usually seen, or even expected, in a one-man extreme metal project. If he is playing them, that adds an extra brownie point. It could go either way, because they're written in a way that doesn't sound impossible for a skilled drummer to pull off live. There's enough restraint put into them that it works, and though the production on them is pretty steady and robotic, it only serves the creepy, "strange looking alien structure" feeling that everything has. If they felt totally human, that would kind of go against the vibe. The vocals operate in a similar manner - at first, they sound critically buried in the mix and near indecipherable but give them a bit of time and they turn into the grumbles and murmurs of the bizarre insects that crawl about the terrain you landed on. The production as a whole kind of sounds top-heavy and thin at first, but given further inspection it's the proper vehicle to deliver the sound this is going for.

Although there's more than enough frantic, complex riffs to satisfy your average tech nerd, Culminating Ruin spends a fair amount of time building bridges between riffs as well, sometimes busting out an acoustic guitar or just wandering about in a bubbly, ethereal guitar lead for a while. Though it's far from a direct path, the album generally starts on a much more energetic, uplifting vibe, with a lot more speed and active melody in the riffs. As time goes on, the riffs get a bit more dreary, and by 'Divine Singularity' things have drawn to a solemn, empty crawl, as if at first the alien world you enter teemed with interesting planet life and creatures, but the more you explore, the more barren it gets until you realize that this isn't a thriving planet - it's just the remnants of a civilization that may have died out, given up hope, abandoned the planet, or all three. Even though Dawn of Nil has hit on a really interesting riff style, that very much stands out, Culminating Ruins doesn't have lazy songwriting that relies of the strength of the riffs to get it going anywhere. Laugier wrote some massive peaks and valleys in this release, immediately giving it more listenability and staying power than most one-man bands you';ve heard.

It's pretty fucking difficult to find an extreme metal band that genuinely sounds fresh, so on that basis alone it's worth checking out, and the tasty melodies and well-written songs will keep you coming back once the novelty fades. Definitely one to check out when you're making your last rounds for your "best albums of the year" list.