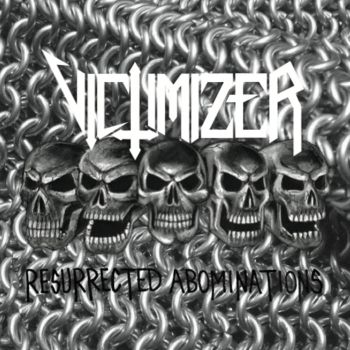 Thousands of bands act under the radar of broad parts of their target groups and Denmark’s Victimizer is (or was?) among these unfortunate formations. I did not know them as well until I stumbled over some of their items in a mail order I had not checked so far. Now Resurrected Abominations rotates on my turntable, only eleven years after its release... The musical content pisses on 21st century elements. It seems to be inspired by albums like Artillery’s “Terror Squad” (forgive me, I have a tendency to national comparisons). I am listening to a voluminous mix of thrash, speed and death metal, while thrash being the dominant element. The fact that they have cover of Hobb’s Angel of Death and – released on an earlier output – Slayer in their portfolio underlines the stylistic preference of the five-piece.

The songs have their best moments whenever the band puts the pedal to the metal. Vice versa, the mid-paced title track with its solid yet relatively unspectacular guitar leads is less impressive than the name-giving piece should be. 'Worthy of Hell' also does not break speed records, but its angry riffing and the profound heaviness during the excellent, double bass nailed chorus makes it to something great. Not to mention the up-tempo part after the second chorus that increases the vibrancy of the opener remarkably. By the way, 'Reap the Nuclear Whirlwind' shines with similar features while offering the highest velocity here. Thus, it lives up to its name and just like the further tracks, it profits from the expedient sound. The bold guitars rumble, the raging drums do no come off badly and the lead vocals are neither the most prominent element nor subjugated by the force of the guitars.

Victimizer’s EP is based on its brutal charm. All songs have written “anti-social and raw” in big letters above them and the technical execution gives no reason for complaint. But I haven’t mentioned the tracks on the B side so far. The cover as well as the own composition attacks in a powerful manner. The group never loses its Nordic coolness and so their music is no ecstatic experience, but all songs reach a more than just adequate level of aggression and nastiness. I don’t know what the band members are actually doing. Maybe they stayed at home in the past eleven years due to a voluntary quarantine? Would be better to get back and record some more tracks in the vein of the here presented material.