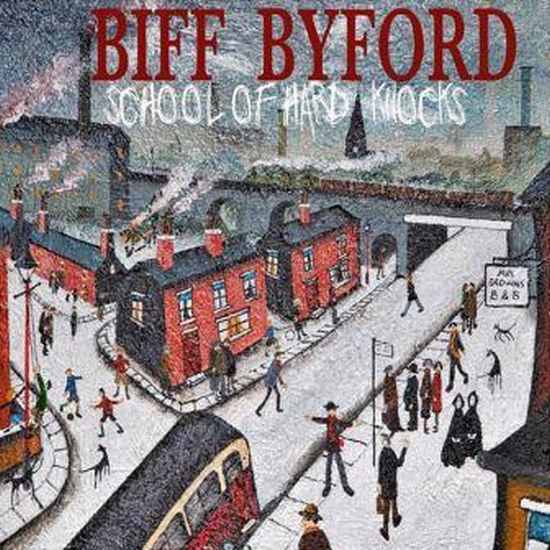 Once we had an icon called Lemmy. He began as a more or less normal musician – who cares about bass guitarists? – and his vocal skills were limited. However, due to mysterious circumstances, slowly but steadily he became the elder statesman of metal. He never drank raspberry syrup, everybody knew at least one of his salacious stories (never ending repertoire), he gave thousands of concerts and his constitution defied successfully the laws of physics until he died on stage. Rumors say that he left us 17 days after his final concert in Berlin, but I am sure he took the last breath in front of his celebrating fans.

Today we have another icon. A man who has aged gracefully, an anti-Ozzy, so to say. Yes, he also went through rather embarrassing times with his main band. Ridiculous poser outfits from the second half of the eighties were shameful, but just like wine, he became better and better with the years and now I am happy to listen to School of Hard Knocks, the first solo album of Biff, a man who maybe has drunk raspberry syrup for one or two times in the last 69 years, but he surely did it with dignity.

The school that Biff presents is pretty similar to the educational institution we know from his main formation. In view of its musical direction, this debut could be a Saxon album as well, at least broad parts of it. And why not? Remember the dogshit that Halford released as he had left Judas Priest. Compared with his painful, commercially motivated experiments, Biff remains authentic and honest. This is not to say that I like each and every number (the banality called 'Me and You' is even truly terrible, a pop song with kitschy lyrics and saxophone solo), but nearly the entire full-length reflects the integrity of its primary protagonist. Moreover, it starts with two songs that would have been a fantastic addition on every Saxon album.

'Welcome to the Show' is as original as its title, but tradition and originality have never been closest friends. The pillars of the opener are its effervescent guitars opening, the coherent verses and the catchy, simple yet titanic chorus. Yes, the lyrics are written after having received some very hard knocks and the brain did not work very well during the process of penning lines like "raise your hand, I'll introduce you to the band", but I don't care. The song has a positive, lively and inspiring aura and this is what really counts. Not to mention Biff's familiar voice – he is still able to contribute some high-pitched screams and his natural charisma comes through every line he sings. The title track is another good time rocker with an earthy riff, crispy guitars and a chorus that gets wilder with every new round. Enjoy this songwriting of the highest art, every tone fits exactly, and the seemingly autobiographical lyrics lend the track a special flair. By the way, both opening tracks are written by the master himself.

Needless to say that even Biff cannot keep this quality level. 'Inquisitor' with its Spanish guitars joins the myriads of pretty useless intermezzos and the following 'The Pit and the Pendulum' sounds predictable and somewhat stiff. Yet the album has still some aces up its sleeve. Both the valiant, compact mid-tempo metal rocker 'Hearts of Steel' and the comparatively ominous, very heavy 'Worlds Collide' and 'Pedal to the Metal' do not lack edges and corners, but Biff shows another side as well. His voice and the harmonies of 'Scarborough Fair' are like lovers that have finally found each other, a perfect match. It's no wonder that millions of people love the melody of this traditional English folk song – and alas, it is no wonder as well that the idiots who reviewed the album in the German Metal Hammer and the Deaf Forever mag babble about a "Simon & Garfunkel cover". God, let brain fall from the sky. Or send a Corona overdose to the editorial department of these glorious magazines.

The last third of the album with the casual, appropriate artwork has not much to offer, but most songs also do no harm. Summing up, School of Hard Knocks is neither better or worse than a typical Saxon output, but it's slightly different and it manages to give the listener what (s)he expects without being completely predictable. It's no original music, but the artist himself is an original and that's at least as good as any form of innovative sounds. Biff says in the liner notes that "it's a collection of songs written over the last few years, it's been a great journey, hope you like it". Well, most of us will do and thus, I just have a last wish. Hopefully, Sir Byford did not forget the previous metal icon and has sent a copy to heaven in order to give Lemmy (R.I.P.) a chance to lend an ear as well.