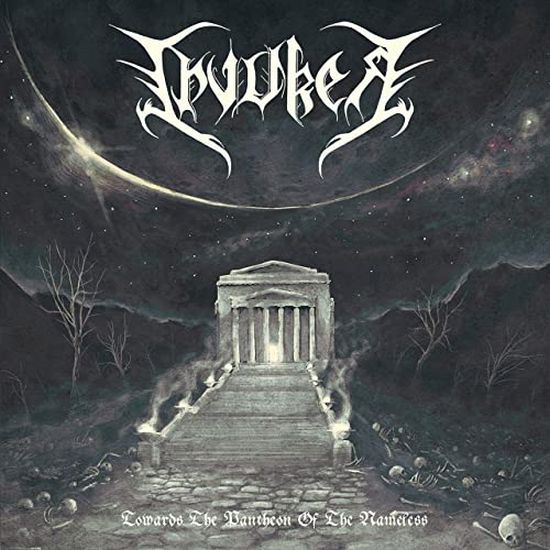 An atmospheric artwork in combination with a black metallic approach always catches my attention and therefore I was curious to discover Invoker’s third album, although I am not familiar with their previous outputs. What I can say is that the band from Germany sounds fresh and maybe they draw strength from a five-year break since the last full-length. The songs have inspiring (harsh) melodies and many of them create a black metal compatible aura, even though the vocalist does not fully convince. His constant growling gives the material a rather tedious death metal touch. It’s no drama and one can get used to the vocal performance. Yet compared with the variety of the musical approach, the monotonous voice does not deserve praise.

Speaking of the less convincing elements, I admit that the reasons for the integration of the symphonic intermezzo 'Dark' remain a mystery to me. These two minutes give me nothing, they just hurt the flow and build a kind of sonic wall between the good songs before and after this interlude. And believe me, my dear supporters of the extreme arts, there are good songs! The pretty melodic riffing of 'Devil’s Door' is casual and gloomy at the same time. The entire track does not force the listener on its knees due to an overdose of violence, but its fantastic flow, the extremely well-embedded solo and its independent approach are intriguing. The dudes of Invoker create something great with simple tools and that’s an art in itself. Already the title track, the first regular number after the intro, reveals their song-writing skills. The first tones burst with energy out of the speakers until a more melodic guitar takes the lead. A well-designed interplay of vehement and rather mid-harsh sections forms a track whose riffing scores with liveliness and power. If you like to have a point of orientation, bands like Dysangelium follow a similar approach.

The sound neither puts the focus on clarity nor does the album suffer from a blurred mix. Especially the guitars score with depth and from time to time, they convey autumnal pictures of a silent lake in a misty surrounding. Sometimes it’s a bit too much of a good thing, the almost dreamful 'Breathless', an instrumental or rather an excessive guitar solo, is focused on atmosphere exclusively while forgetting to offer an appropriate does of harshness. Once again, no drama and maybe a sign of Invoker’s individual character, but the “complete” tracks are the ones that make me raise my blood (…or is it milk?) filled horn. 'Towards the Pantheon of the Nameless' has its best sections whenever the band offers energetic, aggressive yet non-chaotic and still marginally harmonic parts. The powerful mid-part of the closer, framed by a growing intro and a short outro, marks a good example in this context. In a nutshell, Invoker haven’t shot the brightest star into the black metal firmament, but some tracks mirror an enormous potential and I hope the album gets the attention it deserves.