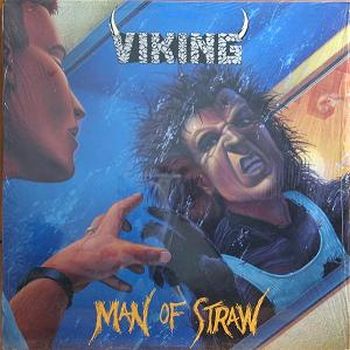 Breaking news: Viking's second full-length benefits from a much better production than the debut. Okay, a worse sound was not possible, anyway, Man of Straw scores with a clear, differentiated and cutting mix. It is on a par with the sound of more famous thrash albums of its time. Unfortunately, the vinyl suffers from another flaw. The entire A side fails to present a remarkable highlight. Is there any 'Killer Unleashed' who intends to form a 'Militia of Death'? Not at all. The five tracks pass by and show a more precise, more focused face of the formation, but this does not mean that the songwriting causes goose bumps. Acceptable and decent, these attributes describe the quality of the fairly complex tracks. The longest of them is called 'They Raped the Land' and especially this fairly epic tune seems to be a harbinger of Dark Angel's overlong anthems from "Time Does Not Heal". But this statement only refers to its style, not to its class. Free from groovy elements, it consists of many different, mostly fast sections and the thrashing intention is omnipresent, but no matter how hard they try, their efforts do not result in a fascinating track.

'Winter', the opener of the B side, picks up this kind of configuration. And due to whatever reason, the first tones of this track mark the point where the album gains momentum. The song starts slowly, but it does not take long until the band releases all brakes. The riffing is catchy, the mid-paced parts as well as the fast eruptions capture my brain and some furious solos also add value to the song. I listen to an orgy of riffs which is combined with the vocals of Ron Erikson. He seems to be on the run, and I wish somebody would give him a glass of water while he sings. The lyrics could almost fill a thick book and therefore it is no wonder that the dude runs out of breath. Speaking of the lyrical content, 'Creative Divorce' deals with the arduousness of a husband and his crude thoughts. Well, who does not know this situation in one way or another? Nevertheless, most of us do not "plan her demise" and I hope that everybody who reads this review is not a part of the minority in this context. But on the other hand, I also think that most of us have never written such a strong piece of pure thrash. 'Creative Divorce' glitters with a memorable chorus, clearly defined riffs and an extra portion of speed. The very solid title track, equipped with a similar design, closes the output that clocks in after 47 minutes. Attention, Anthrax: the lads of Viking deliver the real "Attack of the Killer B's".

Finally, I have to mention the most surprising track of Man of Straw. Viking do not make innovative experiments, but they have recorded an unexpected cover song. I am speaking of Pat Benatar's "Hell Is for Children". For sure, Erikson and his mates consumed very special pills the day they decided to choose exactly this piece. Anyway, they avoid kitschy elements and the roaring voice gives the song a brutal touch. However, this catchy number remains an exception. Viking do not have a general affinity for pop songs and their own compositions are rather demanding than easily accessible. Too bad that the first half of the vinyl fails to deliver one or two hits. This fact makes it impossible to give a higher rating, even though the B side has an invigorating effect. Not to mention the better production...