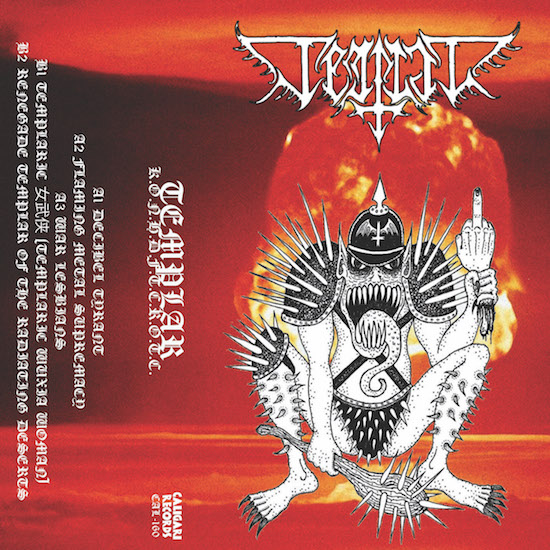 Coming from Finland is a mayhemic, loud an battering form of thrash and black metal; total annoyance, total anarchy. Seemingly sloppy at times as if half the band is playing one thing and the other half has their own parliament going on; not for those of you who are looking for some kind of decency in music. Templar sounds like they really don't give a damn about anyone or anything; no cares for any of that hippie analytical shit like coordination or timing and flow, they're just doing them.

The music (hahaha "music") on their debut demo is destructive and barbarian yet there are some moments to be highlighted like the riffing on 'Templaric 女武侠' and 'Flaming Metal Supremacy' that in contrast to the ruckus of a production, delivers on some six-stringed delight. And in a manner of adding some amusement to the intentional clatter, Templar's vocalist appears to have an excessive liking for the 'ooh', so much that its used in teasing and joking ways often.

Oh there's more, the way this guy screams is lawless, a real commonplace style of vocals. Those attempts at accented yells combined with the gibberish-like vocals and the messy production and musicianship makes for a listen that you can't help but laugh. Favorite tracks? 'Flaming Metal Supremacy', 'War Lesbians' and 'Renegade Templar of the Radiating Deserts', I think those are the most entertaining of the bunch perhaps due to the way they mock all things music; though I would say the twin guitar solo did ironically show some competence. It's only 18 minutes in duration, yea it's a short stretch during the hurdle towards the finish line but its too comical to not find some amusement and laughter in.

A brilliant cluster-fuck of drumming, riffing and chirks or weird attempts at King Diamond screams, yet a comedy of errors never sounded so damn essential. Knights of Nuclear Hell Decibelfucking the Charred Remains of the Christ is probably what metal in its primitive, naked form sounded like before being clothed and matured. Highly recommended for cavemen and people that have been practicing social distancing long before COVID-19.