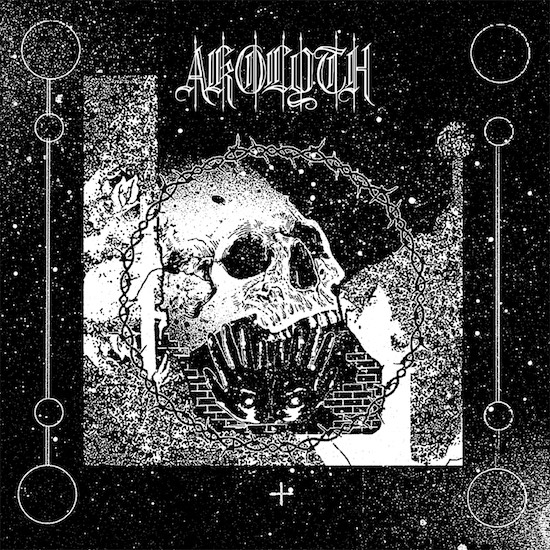 Type: Full-Length
Release Date: May 29th, 2020
Label: Amor Fati Productions
Genre: Black
1 A Work Of Ages
2 The Night, The Fog
3 What Dwells Between Fractured Worlds
4 To Become His Doorway
MetalBite on YouTube

From where this comes from? a conjuring of 1st wave black metal equipped with a rawness of the era and an everlasting aggression impossible to maneuver around. Candidly speaking, there is no in between here, either you like what Akolyth are doing on their self-titled debut or you don't. Belgium strike again, this time they invoke a miserable array of frequencies honing back to the early days of black metal; 4 lengthy songs attempt to cover the era through giving a respectable rendition of its formations at the time. Uncleansed throaty vocals, electrocuting guitar waves, a beastly display of varied drumming. Collaboratively, the effort stinks of sincerity to the age, but finds the room to carve out and implant an identity of their own.

In all honesty, seeing the first track 'A Work of Ages' bare a length of 9 minutes was a bit worrying, even more, songs down the line following the same run-time was concerning. After all, the music is primarily black metal, no doom anywhere (though 'The Night the Fog' is a bit mid-tempo) to give meaningful occupation would manifest; so by nature one's left to wonder how would 9 minutes be spent playing old fashioned black metal, it’s not like it was an atmospheric adventure a band such as Paysage d'Hiver would cast down on the listener. It's here the drummer and guitarist put their metal to the test with multiple variations and changes in rhythm, leading, lending support and providing the foundation for the record to flow well. Just before you think you've heard enough of one rhythm, it replaced with either a sudden shift in riff or drum structure, and this happens often enough to flavor the Inquisition-esque (Colombia) abuse of the power-chords.

You can tell the vocalist is having a smashing time just by his sinister laughter on 'What Dwells between Fractured Worlds', however the bands most vicious and classy bit of material makes nightfall on 'To Become His Doorway'. Various musical sectors are merged with a fluency in transition not quite present on previous tracks, in addition to possessing more diverse structures. The riffs and drumming appear more interesting, dare I say, catchy, and the vocals reek of a victory wail as though Akolyth has met their estimated goal. As an overall evaluation, there are times the craftsmanship would utter of a rawer, less technical, more candid Svartsyn (His Majesty) which is a good thing for me at least because I freaking love that album; however, I can't help but wonder how much more ear-worm could have been achieved if songs featured more in depth guitar work (solos) apart from the momentary diversion in rhythmic sequence. If that's not a bother to you then surely Akolyth is something to check out and keep thought of granted this is the band's first steps.