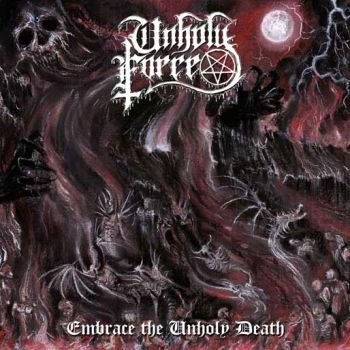 The band deliver their attack with energy and conviction. The main influence in their sound is the primitive thrash/death metal from the 80's with the Brazilian thrashers of yore as keystone. In the faster parts there's the undeniable influence of Sarcofago and Sextrash and the vocals remind me of bands as Expulser, early Sepultura or Psychic Possessor. The riffing is straight from the school of Possessed and there's quite some Destruction to be heard as well. The band don't shy away from incorporating some speed metal orientated stuff either, the names of Agent Steel and Whiplash popped up in my mind on occasion. Furthermore, there is a generous helping of Scandinavian black metal in there as well, as evidenced in tracks like 'Sacred Fire' and 'Black Spirits of Revenge'. The guitars here have that same venomous bite that can be found in the early works of Gorgoroth and Immortal, and the band know how to fuse these sounds into their South American framework. For the most part that is, though: unfortunately, a couple of the songs lose some of their power by that same Scandinavian riffing. These tracks just sound too "nice", losing some of the menace that the band generally exudes.

This is a more than decent black/thrash/death metal album with great production, it's just unfortunate that there are a couple of songs on here that lack the power to totally convince. Personally, I would've liked it more if the Scandinavian black metal in their sound had taken more of a backseat in favor of their primitive thrashing influences. It would have packed more of a punch in my opinion. Still, if you're into blackened metal like Nocturnal Graves, Extirpation, Degial and others of the kind, this album will not disappoint.