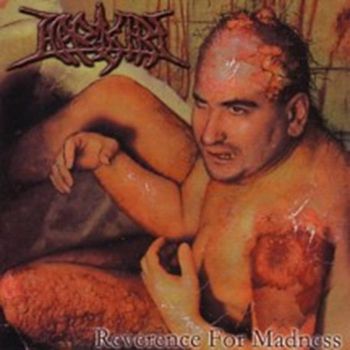 Man, I've seen quite some repulsive covers in my time, just think about Disgorge (Mex), Pissgrave or Flesh Grinder, but this one made it to my top 5 without problem. It looks like someone pelted your Uncle Fred with minced meat while he was sitting in his tub. Poor guy. I try to imagine the band's meeting where they conjured up this concept, jeez. Looking at that cover you'd almost forget that this is a pretty decent album.

In its short duration this album manages to take me back to the time when Cannibal Corpse, Suffocation and Deicide released their first albums, immediately establishing a nice familiar feel. The music on offer here is heavy death metal that alternates blasting fury with groovier parts and where hoarse grunts and throaty screams fight for a place on the foreground, with raging leads popping up to keep the listener focused. Its remorseless aggression hits you in the face like a brick, helped by the fat tone of the guitars. When the band lets go of the accelerator they still keep it heavy and flowing, showcasing good musicianship and skill in their compositions. To describe the music: you take the attack of early Cannibal Corpse, couple that with the sound and compositions of Suffocation, add some touches of early Gorguts and play it with the punkish fluidity of a young Deicide. At the start of 'Enslave' I can even hear a vague Bolt Thrower influence. It's a simple recipe but it leads to a nice result, it's hard to sit still listening to this. It may not be haute cuisine, but it's tasty nonetheless.

There's one point I'd like to make though and that is the fact that the listener is treated with 20 minutes of silence following the final track. Sorry guys, that's just bullshit, simply put on the album to flesh out the 25 minutes of music on here. That being said, what remains is a short but sweet US death metal gem that unfortunately has fallen by the wayside through time.

You can place these guys in between their colleagues at the time like Teratism, Skinless, Anoxia and Pentagoria, all bands whose style predates what would later be referred to as brutal death metal and Harakiri fits in well among this company. They play their death metal with the needed variation and a copious amount of brutality and will not disappoint any fan of 90's US death metal.