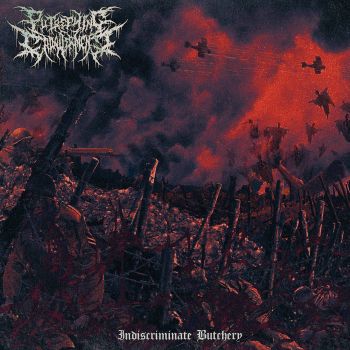 This is a concept album. I know, those words can conjure up a feverish bad acid trip nightmare in which the faces of Rick Wakeman and assorted members of Emerson, Lake & Palmer can haunt you into unspeakable terror. Rest assured however, no pretentious prog sentiments or forced narrative here. It's a brutal death metal album and its general theme is World War I. This immediately piqued my interest; it was a welcome change of subject matter in this genre. After all, it was a brutal conflict, never seen before it's time, and it's the perfect subject matter for death metal. Check out the graphic novel "It Was the War of the Trenches" by Jacques Tardi or go to Google Images and search for "les gueules cassées" and you'll see what I mean. The album's great artwork also helps to set the right mood for this concept to unfold in all its horrifying glory.

The style the band operates in is reminiscent of acts like Viral Load, Meathook, Putrid Pile and some early Devourment thrown in for good measure. It's a varied sort of brutal death metal with blasting madness alternating with up tempo parts, grooving double kicks and the occasional slamming slow sections popping up. Tracks like 'Corpsemine' and 'Mustard Gas Ulceration' have middle sections where the band takes the foot of the gas entirely, creating a haunting atmosphere driven by dissonant guitars, building up menacing tension in their music before launching again into their guttural, down tuned assault. It may take a few listens but you'll see the band has some pretty well constructed songs and they know how to keep them interesting and aggressive.

So this makes it all too bad that the music is let down by an uneven production job and, at times, sloppy musical execution. Let's begin with the overall sound. This album has a rawer production than most brutal death releases which could have been a plus but, thanks to the peculiar mixing, makes the music sound chaotic in its faster parts. The bad kind of chaotic. Bands like Diocletian or Filtheater turn this kind of chaos into menacing brutality while here it turns into sloppy disappointment. This aspect is not helped by the fact that the individual members don't always seem to play at the same speed and sometimes sound like they have trouble keeping up with each other. On top of that come the cavernous vocals that certainly could've used less reverb. Towards the end of the album they start to get on my nerves a bit.

I have a very double feeling with this release. On one side the band's subject matter makes for an interesting concept and their songs are thought out and, I dare say, more interesting than your average brutal death metal act, without losing aggression and impact. On the other side you've got the fact that it's all let down by a lesser production job, as well as, in parts, sloppy execution. This could've been better but I'm giving them the benefit of the doubt though, I'm intrigued enough to be curious about what the future will bring from this band.