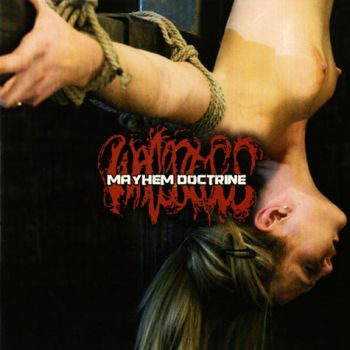 I remember back in the day when this gang of ruffians released their infamous debut with its equally infamous coprophilic cover art and that the editorial pages of metal magazines were filled with disgusted and outraged reactions for months to come after that. Where has the time gone, one asks himself. After that, the band kept it going with their own brand of hedonistic fury and filth. It must be noted that for the troupe of porn addict hooligans that they are, the band is actually pretty competent at what they do, a fact they make clear once again on Mayhem Doctrine.

From the first note, they launch into their death metal assault with raging determination to bludgeon the listener into squash, and it's interesting to note that Waco Jesus doesn't sound like most of the brutal death metal legions out there. Their sound is firmly rooted into death metal of the early 90's like early Hypocrisy, Sinister (NL), Cannibal Corpse with Chris Barnes and "Harmony Corruption" era Napalm Death. The riffing is executed with punkish fluidity while the percussion keeps it all together with furious blasts, thrashy mid-tempo rhythms and slower, groovier parts to assure the short songs keep varied and interesting. On top of all that is the aggressive bark of vocalist Shane, spouting the vile lyrics over the violent death/grind. His is a style that's not as low as you have become as accustomed to from other BDM vocalists, utilizing a gruff, growling style that has more to do with bands like Repulsion, Deicide or Atrocity (US). They deliver their assault with hardcore energy, more akin to the approach of how the more aggressive thrash bands (think Dark Angel or early Num Skull) deliver their punch. They keep it swinging throughout and after a few listens these songs will be planted firmly into your deteriorating brain.

This is fierce death metal, steeped in old school attitude, with memorable songs, great production and dripping malicious aggression and if you're into violent death/grind you should have a field day grinding this down. Just try not to injure any old ladies while listening to this.