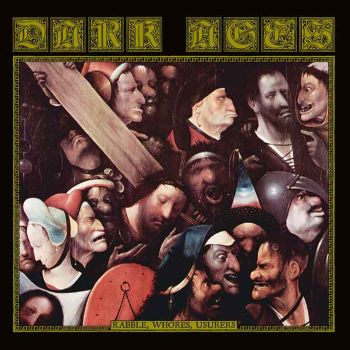 If you scan through my list of reviews you'll see that I primarily deal in death and black metal, grindcore and fast thrash. You know, brutality and bloodshed for all, that kinda thing, so it may surprise some that I also have an interest in the darker and weirder side of electronic music. I'm a huge sucker for dark ambient and the experimental sounds brought to us by labels like Cold Meat Industry or Tesco Organisation to name a few. Music that can be equal parts soothing as well as unsettling and can be as terrifying as it can calm the nerves.

Dark Ages was a side effort by members of Drudkh, a band I do not listen to and that I have no particular interest in either, I'm afraid. The thing that actually drew my attention to this project is the fact that this band establishes the right mood for their concept and sounds by the artwork. Utilizing paintings by great late medieval artists like Hieronymus Bosch and Pieter Brueghel the Elder, they immediately set the stage for the soundscapes to follow. It is the right atmosphere that allows the music to take you back to times long gone by, carried away by the haunting sounds emanating from the speakers.

These soundscapes utilize slowly unfolding swathes of keyboard drones with haunting melodies and soothing sounds popping up, creating a majestic tapestry of unsettling darkness. The band make use of different moods to their songs to establish variation between the individual tracks themselves, allowing for different types of emotions to come through. There's the cascade of soothing bells and laid-back choral keyboard sounds of tracks like 'Leprosy' and 'Avarice', but there's also the unsettling, more threatening ambience of 'Deformity', with its haunting tubular bells and organ sounds, and 'Malice', with its ominous Viking choirs and sparse percussion. All of these moods and atmosphere blend together into majestic soundscapes that are abundant with ambience, in which relaxation and unease can go hand in hand. It's almost cinematic. Too bad it's all over in 42 minutes.

You have to be willing to go along with this type of music, of course. I can easily imagine that there are those who consider this to be the pinnacle of boredom, deriding it as "elevator music", but if you are willing to go along into the world of Dark Ages, you'll find yourself a beautifully crafted piece of work in which dread and ease are combined in exquisitely constructed soundscapes that drip with ambience. If the earliest works of Mortiis, Rob Darken's Lord Wind or releases by a label like Cryo Chamber don't turn you off, this will fit you just fine.