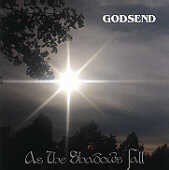 Type: Full-Length
Release Date: October 2nd, 1993
Label: Holy Records
Genre: Doom
1 Slaydream
2 As The Shadows Fall
3 With The Wind Comes The Rain
4 Autumn Leaves
5 Spiritual Loneliness
6 Beyond The Mist Of Memories
7 My Lost Love
8 Walking The Roads Of The Unbeheld
9 Silence Of Time
MetalBite on YouTube

Norway is a well-known country for being the homeland of the evilest black metal bands in metal history. However, it´s not very common to see a great doom metal scene coming from this Nordic country, their neighbors Sweden and even Finland have a more prominent doom scene. The main reason why Godsend caught my attention was, a fairly old-school doom metal act from Norway that has Dan Swanö singing, that’s an oddity, isn’t it? The sticker in the slipcase said this “A must for fans of melodic doom metal from the 90´s era, featuring Dan Swanö! Includes a bonus cd with the demos!” Three key concepts that I could not skip; first, doom from the ’90s, second, Dan Swanö, and third a bonus cd.

This is Godsend’s debut record from 1993 a decade mostly dominated by death metal. Doom metal was an underground force only appreciated by true fans and compulsive collectors. So, what do we have here? As the shadows fall starts with “Slaydream” a rhythmic rather stoner approach to doom metal, not a quiet slow tempo song but with more dynamics and interesting guitar variations. I was expecting a slow funeral march track but the band decided to open the record with this stoner song. Dan Swanö's vocals are deep and different from the countless projects I have listened to him. The second song is the title track and here you talk about business. In my opinion, this is the song the album should have started with; a slow, dragging, almost funeral doom style tune. If you promised me doom, give me the slowest of the slow crushing brutality, no time for happy anthems, only misery, and depression.

Ok, let´s continue. I was hyped with the second track and was waiting for more slow bangers. However, the third song “With the Winds Come the Rain” was a bummer; a rather “happy” melodic song with cheesy lyrics and some interesting guitar parts here and there. Not what I was expecting, at this point of the record the band has been inconsistent in the song-writing department. The musicians are very capable with the instruments but the song-writing needs to be more consistent with the doom metal label. From the fourth song “Autumn Leaves” to the seventh song “My lost Love” the record gained my attention again. These songs are slow and gloomy, showing some interesting Swanö dreary vocal moments. Nonetheless, the next track is the worst one on the record, “Walking the Roads of the Unbeheld”. It sounds as if you were listening to a different record, a The Cure record to be more specific. This track is so happy and uplifting that it almost ruined the whole doom experience promised in the sticker. Not even melodic doom sounds as happy as this song. I was about to turn the cd-player off when the last track began; “Silence of Time”. Again, a slow crushing funeral march with some cryptic vocals from Dan Swanö. This song reminds me of funeral doom bands like The Funeral Orchestra, Mournful Congregation, or Skepticism. A triumphant doom anthem to close the record.

To conclude, I have to say that it was a bitter-sweet experience listening to Godsend´s debut record. The “trve” doom songs were delightfully written and executed. However, the songwriting of the three tracks that ruined the experience was not up to the standards of doom metal. As the shadows Fall felt incomplete and inconsistent but was worth listening to a record where Dan Swanö collab with amazing vocals and also a doom record from Norway, a country more known for their black metal scene.