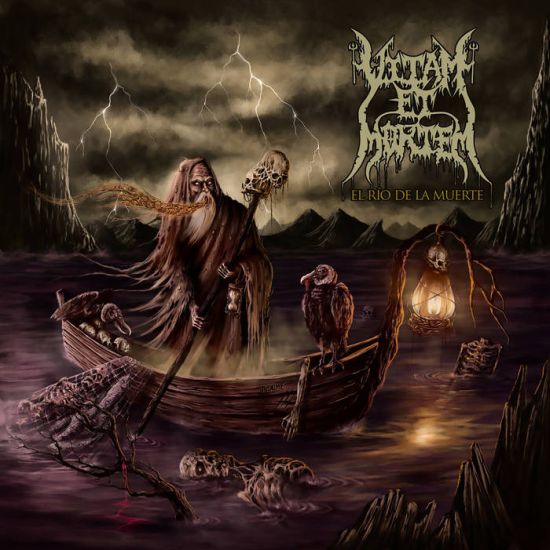 Hailing from LatAm, specifically Colombia, I expected a way more brutal approach to death metal from this band called Vitam Et Mortem. The album begins with an odd sounding classical arrangement and the intro for the second track called 'Los Cuerpos en el Río' is actually a parody from a very famous Christmas song “Los peces en el río”, it sounds like a false start and it’s not funny at all but when the song properly kicks in things get really interesting. The first thing I noticed was the production: way too polished for this type of death metal that is still actually pretty dark and heavy composition wise. The lead guitar is very prominent and sometimes drifts away from the main riff to accompany the vocal line without it being overly melodic. These leads kind of remind me of Dissection demo era, closer to death metal.

The band doesn’t use a lot of riffs, they prefer dissonant and dark fast tremolo guitar melodies on the lower frets. Rhythmically the band is also very rich, they draw stop and go marching beats between the bass and the drums to bedizen the main themes and even if it doesn’t take the melody away it makes the music more menacing overall. 0 groove, 100% satanism. There are some acoustic passages that sound like a Helloween-esque bard playing, the medieval effect is well coined all over the album. The album cover features a cartoon witch or a wizard and shows off the death/folk roots from the band.

The mix is perfect; every instrument is perfectly leveled and always audible. As well as the acoustic bard parts there are some piano with spoken word passages that technically were perfectly recorded but those are the parts of the album I’m not really into. The slow and heavy breakdowns and the meaner parts overall sound awesome even with the leads going crazy on the background. I appreciate the distinctive elements and the originality in composition from these guys, and I’m hoping they release an album more focused on the songs than on the storytelling power metallish thing someday; the last couple of tracks are one cover (from Masacre, one of the first and better known death metal acts from Colombia) and one re-recorded old song, this classic track absolutely slays because it’s less experimental with the medieval instruments and it focuses on the aggression while it keeps the interesting leads and the rhythmic guitar giving it more punch and weight.