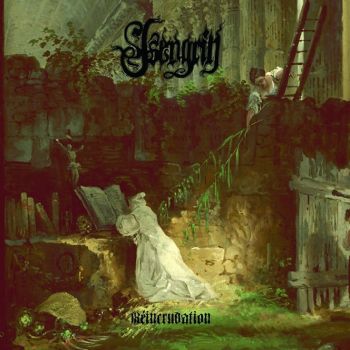 Ysengrin is a French band founded in Normandy back in 2005. Currently, the band consists of three musicians, being Guido Saint Roch the only founding member of this band. Ysengrin began as a solo project, but Guido has traditionally been accompanied by other two musicians in order to complete the line-up. The current bass player, known as Alrinack and Inkantator Kour, who shares the duties of playing the keys, performing the vocals and other stuff with Guido, are involved in many other underground projects. So, in practice Ysengrin continues to be Guido's personal project.

Ysengrin's sound is usually defined as “hermetic dark metal” and it can hardly be restricted to only one subgenre. The band's peculiar and primitive style flows between the boundaries of doom, death and black metal. Conceptually, the music is strongly influenced by esoteric and occult themes, which play a major role in the forge of Ysengrin's very personal creations. The ambience is dark and suffocating and the production has been traditionally raw, yet very atmospheric. Ysengrin's core sound is clearly represented in the album Réincrudation. This is in fact not a new work, but a compilation of the remastered old demos Archivum MMV-MMX and Alchimëte. Réincrudation portraits the very personal sound of Ysengrin in its purest form. The compositions have a primarily slow pace, very doomish and atmospheric. The first half of the album contain tracks like 'Abstinence', which have a pretty repetitive pace with very simple drums and riffs with a quite raw and crushing tone. The variety only comes in form of interludes, which strengthen the mysterious atmosphere of the whole work. Anyway, the most interesting tracks come at the last part of this compilation. A remarkable example would be 'Antéros', which has more diverse structures. Vocally speaking, the band combines the typically death metal growling vocals with a clean one. The growls are quite primary and remind me the most traditional and underground death metal scene. On the other hand, the clean ones have a distinctive occultist touch, as they sound like a sorcerer invoking a demon. The peak of Réincrudation is undoubtedly the longest and most elaborated track entitled 'Mystéres De L'Artifex'. The production in this track seems to be better balanced and cleaner, yet still rasping. It combines the aforementioned harsh and clean vocals with better structured guitars riffs. The track flows more naturally and it has a more coherent structure, less weird, which could be worse for some people, but it is much better in my opinion. It also contains some interesting keys in the background and even some bells who add a mysterious touch. Experimentation and weirdness don't disappear as Ysengrin still introduces some dissonant guitars riffs which reinforce this gloomy and occult ambience.

Ysengrin's music is in fact not an easy one to digest. Though I must admit that the 65 minutes that this work lasts have been a hard tack for me, there are still some good points to highlight, which save the album for me. When the tracks are better composed and have a more varied touch Ysengrin's occult metal can have some interesting details and remarkable sections as it happens in songs like 'Mystéres De L'artifex', for example. This is obviously a demo compilation, a fact which makes understandable that the band had yet some aspects to polish. Last tracks, as I have mentioned, mark the correct path for the band so it would be interesting to see what Ysengrin can offer in future.