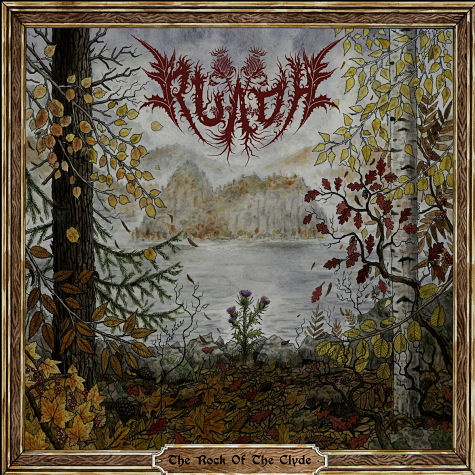 Ruadh presents themselves as an atmospheric black metal project infused with Scottish history, mythology, and nationalistic pride, which makes it hard not to think about Andy Marshall’s Saor. In fact, Ruadh’s front man Tom Perrett was certainly not afraid to mention Marshall’s earlier albums as a source of influence as both bands originate from the same city of Glasgow and play a similar mixture of Scottish black metal. Considering that a musical scene emerges when artists from the same geographical area compose and play music which share features and sounds, it would have been reasonable to imagine the birth of a Scottish black metal scene spearheaded by Saor and supported by the likes of Cnoc An Tursa and the newcomers Ruadh. However, after having gone through their 2020 album The Rock of The Clyde multiple times, it became obvious that Tom Perrett would not be the torch bearer for the creation of this imagined new musical scene. In fact, The Rock of the Clyde is exactly what happens when an artist is focused on recreating a sound and fails in making it more compelling than the original material.

The similarities in sound between Ruadh and Saor can be noticed immediately at the start of the first track 'Embers' where Tom Perrett’s throaty growls are intermixed with female vocals and tremolo picked guitar. By the middle of the song, we are introduced to flute melody which ends up repeating throughout the remainder of the song all the while building up the intensity and tension. While 'Embers' does sound like a less polished and entrancing Saor song, it can still hold up on its own and some credit can still be given for Tom’s efforts.

However, the same cannot be said for the third and fourth songs 'Winter Light' and 'Fields of Heather' which are both quite forgettable. Both songs display the same overuse of background chords played on a keyboard to attempt to create an atmospheric vibe. This ends up making the riffs feel empty and meaningless. The songs are certainly nothing to get excited about, but at least they are coherent with the remainder of the album unlike the second song 'The Rock Of the Clyde'. The clean vocals on the song are not only very weak, they are also criminally off tempo on a background that sounds like what an amateur power metal band would play. These terrible vocals go on and on during 6 minutes at which point there is an immediate change in tempo as blast beats kick in and we are re-introduced to the familiar atmospheric black metal sound. The song is both odd and terribly executed.

The album ends with the two songs, 'Only Distant Echoes Reign Part 1 and 2'. Clean vocals are re-introduced in 'Part 1' and serve as a build up to 'Part 2' which starts beautifully with a violin melody. Strings and harmonious riffs contribute in giving a deeper and more compelling atmosphere. The album manages to end on a good note.

While I would certainly be one to question the creativity of an artist who’s work consist in re-interpreting another band’s music, I cannot deny that there are some that manages to outclass their predecessors. Ruadh took a multitude of elements that are typical of Saor’s earlier albums, such as the vocal style, the song structure, the atmosphere, the use of folk instruments and the overall production style and failed to make it as compelling and entrancing as a song composed by Andy Marshall. While there are some interesting bits and pieces in this album, I would ultimately not recommend it as anyone would be better off listening to "Roots" from Saor.