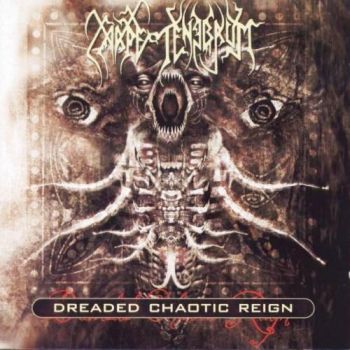 In the late 90's and early 00's black metal was well over its peak, the movement slowly but surely suffocating on the deluge of sub-par bands that popped up in abundance in the mid to late 90's. It was at this time that quite some of the earlier groups started injecting a heavy dose of death metal into their sound, with good examples being Emperor's "Prometheus..." or Hecate Enthroned and their "Kings of Chaos" album. Others just turned full-on death metal, think of the likes of In Battle, Behemoth and Carpe Tenebrum, with varying degrees of success however.

Carpe Tenebrum started out as a side project by two Dimmu Borgir members, Nagash and Astennu. They released two albums of, perhaps unsurprisingly, pretty Dimmu Borgir-sounding black metal, where the spirit of "Enthrone Darkness Triumphant" is never that far away. Both these albums are above mediocre but kind of fail to rise to the level of really memorable. On the third Carpe Tenebrum only Astennu remains and he has changed his course pretty drastic.

If there is one name that comes up the most, it's that of Morbid Angel, gone is the symphonic approach from before. The riffs could have easily been on albums as "Covenant" and (primarily) "Domination" and Astennu certainly has the chops to pull it off. Hell, he has even composed his own "Nar Mattaru"-like interlude in the form of 'Aetherial Benefaction'! The man is at his best when he goes full throttle, the faster parts go down well and have a Morbid Angelcorpse-y sound to them that I can certainly appreciate. That makes it all too bad that when the music slows down to mid-tempo that the songs start to get boring. The slower riffs aren't all that interesting and these parts go on for too long as well. Where Morbid Angel know how to sculpt a crushing heavy slow or mid-tempo song (think of "Where the Slime Lives" or "God of Emptiness"), Carpe Tenebrum just seem to plod along, something painfully clear in a track like 'Sense of Face'. The total picture isn't helping either by the naff sounding drum computer (decently programmed though!) and the fact that the production lacks bass, giving it a lackluster overall sound.

This is one of those albums where the good parts just outweigh the lesser ones. This is something that I would keep in my collection to put on every once in a blue moon. It's not a bad effort per sé but it isn't very memorable either, unfortunately.