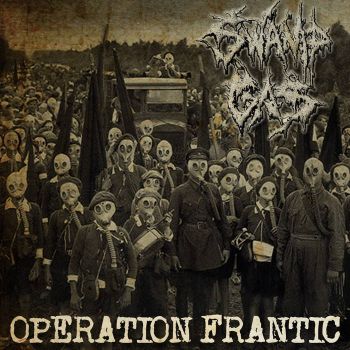 With the abundance of free time I currently have with this Corona lockdown, I listen to music a lot. A whole lot, actually. This has resulted in me rediscovering some albums I have in my collection that I had long forgotten about, one of them being this here Swamp Gas. I don't understand how this one could drop from the radar; this is some good stuff as it turns out. While listening to this album I'm taken back to a time when labels like Wild Rags and Earache unleashed bands like Drogheda, Terrorizer, Nausea (LA) and Brutal Truth upon a oblivious world.

Swamp Gas transports you straight back to these times and from the very first note it is clear that these men have been around in the death metal and grindcore underground for quite some time. The band plays a highly volatile mixture of old school grindcore and primitive US death metal with touches of crust and old school hardcore thrown in. It's fast and aggressive and the compositions take you back to such classic grindcore gems as "World Downfall", "Extreme Conditions Demand Extreme Responses" and, of course, Napalm Death's "Harmony Corruption". You can add the first Defecation album to that list as well. As with those bands the songs alternate blasting speed with up-tempo thrashing beats and slower parts to keep stuff interesting throughout. The vocals switch between growls, screams and a shouting style that comes straight out of the power violence scene where it is employed by bands like Spazz, Lack of Interest and Infest. In album opener 'Stand Down' early Dying Fetus stick their collective heads around the corner while in tracks like 'Operation Frantic' and 'For Human Consumption' I can hear the influence of bands like The Accüsed and Righteous Pigs. That last one is no coincidence as Swamp Gas cover Righteous Pigs' "Fly the Friendly Skies" as a final track here. But while the music has me all dewy-eyed for times gone by, I feel there is a point of criticism and that is its production. It's nice and gruff but I miss some bottom here, it could have used some more bass. That could've given the whole more punch, a thing that I find lacking somewhat here. Also, the kicks are too triggered which annoys me in the faster parts.

Operation Frantic is a good release that owes much of its appeal to me because of the nostalgic feelings it conjures up. But even if you disregard the "trip down memory lane" aspect, I still find this a more than decent release. It effortlessly evokes the spirit of the old school days to great effect and if you're into classic grindcore you cannot afford to miss out on this.