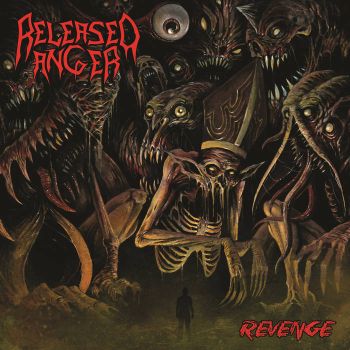 I've mentioned it before and I'm going to again: in this whole old school thrash revival thing you really have to search to sort the worthy bands from the mere pretenders. Most of the stuff in this genre is as boring as intently watching paint dry. It's for a big part kids reliving times they didn't experience the first time around. Good for them, not so interesting for me personally, because, let's face it, very few of these nowadays thrashers will be able to release something like a new "Darkness Descends", "Forbidden Evil" or "Ignorance" anytime soon. And neither will Released Anger, but I found them to be more enjoyable than a band like Havok, to name one.

This is because the music sounds really familiar and that's in great part due to the vocals, it's like listening to a young version of Kreator's Mille. What also plays in their advantage is that their music is faster than most of the stuff I hear these days. I'd describe it as a cross of Kreator's period between "Terrible Certainty" and "Coma of Souls" albums with Vio-lence's first two records. I even heard some dashes of Annihilator and Anthrax in the music as well. The band is at its best when they go full throttle, and it is clear that this band consists of amazing musicians who deliver an excellent performance. I find myself grinning inanely, tapping my feet and nodding along approvingly listening to them speed through their compositions. However, in the fifth track, 'Inner Enemies', the band slow it down a notch and, for me, that wasn't necessary. It's a longer, groovier track and starts to bore me pretty quickly. And there is more that rubs me the wrong way. The album's dry sounding production knocks the balls out of the proceedings a tad. It's just too clean and could have used more grit to it, now it makes the drums sound pretty flat and that's a screaming shame because their drummer is an absolute beast behind the kit. On the upside, they conclude the proceedings with a not so obvious cover of Dutch death/thrash legends Thanatos and they absolutely nail it!

The band is at its best when they're going 666 miles per hour, simple as that. I also appreciate the familiar sound they have; it brings back memories of the faster thrashers of the late 80's and early 90's like (a lot of) Kreator, Vio-lence and Dutch speed dealers like Dead Head and the aforementioned Thanatos. If they would've gone for a more organic production and had dropped the fifth track this would've had me all up in a bundle. Still, this stuff kicks way more ass than what 95 % of the present-day thrash bands (and a lot of the reunited ones!) churn out nowadays.