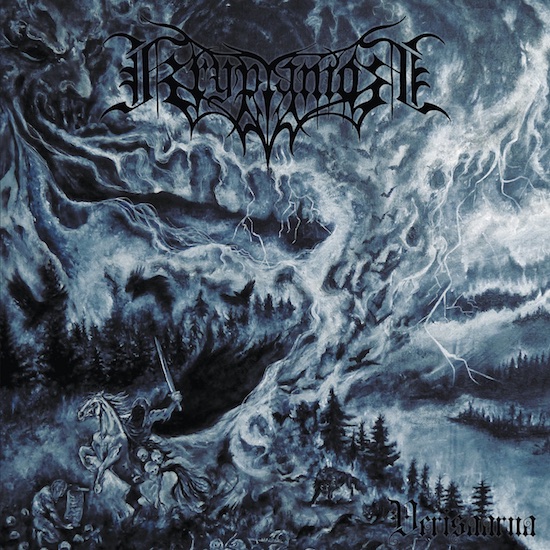 Is there anything more stupid than thinking about Christmas at the end of June? Surely not. Yet I have heard that Santa Claus is living in Finland, exactly in Rovaniemi. Well, I fear it’s a tough surrounding for the dude with the red clothes, because his neighborhood does not really like to practice Christianity. Instead, the people around him love to forge and play frosty black anthems. Hex Inferi, another Finnish solo artist, writes the next chapter of Suomi black metal. Isn’t it great to see how the never-ending story gets longer and longer? Moreover, isn’t it only logical in view of the omnipresent aggression in the land of the thousand lakes that Santa Claus only dares to leave his house once a year?

Under the banner of Kryptamok, Hex Inferi keeps firing full blast over the entire playtime of 38 minutes. It’s typically Finnish, because the output sounds violent, triumphant, pretty icy, occasionally melancholic and very determined. Wrapped in a sound of opaque obscurity, the material reflects both the musical integrity and the almost patriotic attitude of the Finnish-singing lone fighter. His songs present compositional creativity as well as the will to offer black metal without the smallest additives from any other genre. The extremely raw vocals echo over the Northern ground, the intriguing, genre-immanent melody fragments avoid useless bombast and the rhythm section knows to vary the tempo in an effective and dynamic way. The dramatic beginning of 'Rottien Reformaatio' (Santa doesn’t like this title) goes hand in hand with the vehemence of the following sequences and the atmospheric yet powerful instrumental sequence crowns the track impressively. Hex Inferi adds some dark Viking choirs (without sounding embarrassing) and the song reveals an enormous depth. But don’t get me wrong, this is just one highlight of an album whose protagonist hates mediocrity. True black metal maniacs will also understand the furious opener, 'Susien Ӓitee' or 'Pymeiden Tyranni' as a call to close ranks. It doesn’t matter whether or not the songs have a hymnal touch or an affinity for brutality. They are all convincing and as cold as a Lappish winter night.

What do you say? You would prefer to hate the compact, homogeneous and vigorous album? I am sorry to inform you that I cannot deliver good arguments for your position. Yes, you’re right, obviously Verisaarna does not “take the next step” concerning the evolution of (Suomi) black metal. But honestly speaking, I am pretty happy with the form that Kryptamok’s (and my) kind of black metal shows. It’s uncompromising, it’s sinister and competently arranged – what more do you want? Okay, maybe you are one of these guys who say to a cute girl “your lips are erotic, your eyes are beautiful, and your t**s are fascinating, but sorry, I’ve already seen all these things before in a comparable design”, but I am different. I can endure to see such things on several occasions. Additionally, I cannot get enough of authentic black metal and the ever-fertile Finnish scene enriches my metallic existence. Maybe even Santa Claus likes to listen to this music secretly.