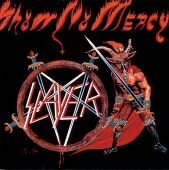 Back in May or June 1984, I accidentally discovered the Metal Hammer magazine. It goes without saying that I bought it immediately. After ordering the previous issues quickly, I studied all articles very carefully. I got the feeling that I opened gigantic gates to a new world. In particular, I must admit that I was deeply impressed by a bloody-minded black and white image of a band that leaned over an abused female victim. Shame on me. But to my relief, I have to say that I was not fascinated by the image itself. It just made me extremely curious and I hoped that the strange guys on the picture were able to extend the spectrum of my record collection.

All my hopes were fulfilled as soon as the needle got in contact with the vinyl and "Evil Has No Boundaries" broke loose. To my own surprise, I did not listen to pure noise. The shrill cry of Araya and the brief guitar solo before the first verse attacked my nerves in a previously unknown manner. But it was a fantastic experience at the same time. Slayer was raging like rabid dogs, but they did not neglect the necessary amount of melodies (I dare to use this word while begging for forgiveness at the same time). Additionally, the opener as well as the following tunes were clearly structured and easily accessible. To equip the songs with a comprehensible formula was not the only good idea of the composers Hanneman (R.I.P.) and King. They were also able to deliver an appropriate level of diversification. For example, "Evil Has No Boundaries" was based on sheer franticness, but the subsequent "The Antichrist" thrived on its overwhelming main riff.

The first four songs of the here presented prototype were (and still are) a thrash metal monument for eternity. Just dive into the dark and homicidal middle part of "Die by the Sword" or the gripping chorus of "Fight till Death". And do not forget to listen very closely to the highly interesting main riff of the latter. And, of course, you must pay special attention to its kamikaze-like solo parts after the second chorus. A sonic brainwash par excellence. And I beg you to... I guess it is better to stop here. I am definitely at risk to lose the last bit of objectivity.

Despite the slightly hysterical aura of the album, the band kept control at all times. This was not least because of Araya´s superior vocals that did not tolerate any kind of contradiction. He sounded like a warlord that commanded his troops to battle. This comparison is not randomly chosen. Slayer proved its capability to generate a deep black atmosphere (for instance during the long instrumental part at the beginning of the fifth track) so that Show No Mercy can be seen as the belligerent mother of all black thrash albums. And of course, a song like "Black Magic" also indicated the more or less strongly distinct interest of the group in relation to occult themes.

Show No Mercy followed a strict guideline without losing its tension. Of course, its explosiveness was constituted on the basis of the very homogeneous song material. Nevertheless, each and every song had its own character. We were talking about the differences between the first two songs and, to give you a further example, the last two tracks showed the same image. The subliminally vicious "Crionics" scored with its evil aura and the howling guitars during the solo sections, while the title track ran stubbornly straight without looking left or right. What the songs had in common was the dense and impure appearance. In objective terms, Slayer´s debut failed to deliver an optimal production. But it possessed exactly the sound that the first work of these musical revolutionists needed. After more than 31 years, I am unable to consider the sound and the songs separately. I worship this album with all its strengths and its very few weaknesses and I do not want to be confronted with a new version of this masterpiece. Just think of the horrible second recording of "Bonded by Blood". To sum up, Show No Mercy was (part of) the Big Bang of extreme metal. I bet that every thrasher still reminds the moment when he heard this album for the first time. A daring thesis? However, this work deserves our lifelong respect.