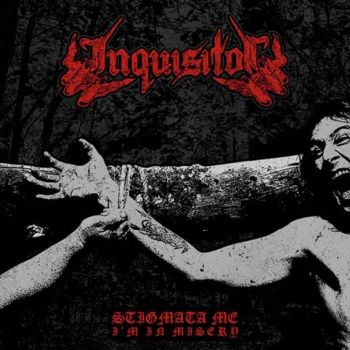 In these past years we have seen a surge of old bands reuniting and releasing new albums that most of the time seem not to be able to recapture the spirit of those days gone by. Naming some of the guilty I dare not; I'm just going to state that some of these oldies DO manage to come out swinging. Like Dutch adrenaline junkies Inquisitor.

Having released their first full length in 1996, and subsequently going into the can a year later, these thrashers always had a somewhat unique sound, thanks to their vocalist. This guy sounds utterly demented, bordering on hysterical at times. Try to imagine the combined forces of Bathory's Quorthon, King Diamond and early Gorgoroth vocalist Hat and that won't even start to describe it to the fullest. I can easily imagine that for some these vocals can be a huge turn off, but for me ... wow! His frantic delivery complements the hectic rage that the music exudes to the fullest. For the biggest part the band goes full throttle, and luckily the musicians know what they're doing because music played at this velocity can easily deteriorate into a shapeless mess. These men stand their ground! When they do slow it down, the music takes on a somewhat dissonant tone that keeps its insane atmosphere firmly in check. Though it is a whirlwind of insane speed, if you listen closely to the riffing you can hear the early 80's influences seeping through the barrage of noise, giving the listener something to hold on. This is a manic blend of aggressive thrash, primitive death and the earliest of black metal and is to be beheld in awe. The overall sound is perhaps a tad too clean for my taste and the Merciless cover they recorded is already the fourth track on this album (I would've put it on as last), these are very minor points of critique that you shouldn't even have to consider. Just check their track 'On a Black Red Blooded Cross', that about sums it all up.

That a returning band can drop a bomb like this after all these years is actually not such an odd occurrence in their case. Some of Inquisitor's line up have kept the juices flowing in acts as Ancient Rites and Centurian after all. Still, this is highly recommended, it's a blistering tornado of aggro metal that should be well worth of your time and attention.