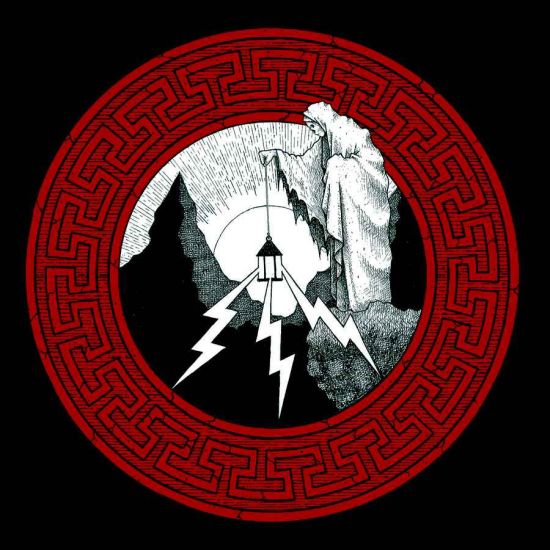 Don't you just love it when you discover a new band and the music sounds just as good as the artwork looks. Huoripukki is a Finnish death metal band still perusing the throne since being formed; currently residing on Fallen Temple, the band returns with a two-track EP to give its supporters and newcomers a peek as to what is perhaps in store for the future. Lopun Airuet, puts on display where the band stands as of current time with two true to the bone death metal tracks 'Uusi Sodoma Nousee' and 'Raudan Aika'.

Appearing intrusively, 'Uusi Sodoma Nousee' begins the act with a depraved chanting layered by howls and growls that sprawl into the first segments of the instrumentation. When the music hits, it does so with every intention of inciting frenzied movements. The vocals are of a black metal snarl and a vicious death metal growl, carried by the primitive approach on the drums and guitars somewhat operating under the buzzing basslines. Though beginning with a doomy mid-pace, 'Uusi Sodoma Nousee' launches a sudden outburst of thrash and black metal frequencies, overlooked by those devastating bellows. The guitars appear in the solo that really puts the icing on this piece of devastation.

The excitement takes a step up the ladder with the bestial war metal like introduction of 'Raudan Aika' that makes 'Uusi Sodoma Nousee' sound like child’s play. I hope this is the direction Huoripukki is heading in and will remain committed to for future installments because I just love this track. Giving it an even more sadistic nature is how the guitars are placed somewhat under the bassy hammering like some foul creature fidgeting beneath the cauterized skin of some sick infection just waiting to burst from the sepsis. We are given some thrashing blows to go along with the condemned vocals heard and more pummeling black/death war metal drumming strengthened by swarming guitar leads to conclude proceedings.

Huoripukki have made their presence known on my radar, I just wish I had a better pair of speakers (than this mini set) to take advantage of this blasting desecration. Fallen Temple and Huoripukki have my attention as a result of Lopun Airuet, I hope the next entry by Huoripukki sees a continuation of this affair between good artwork and death/war metal.