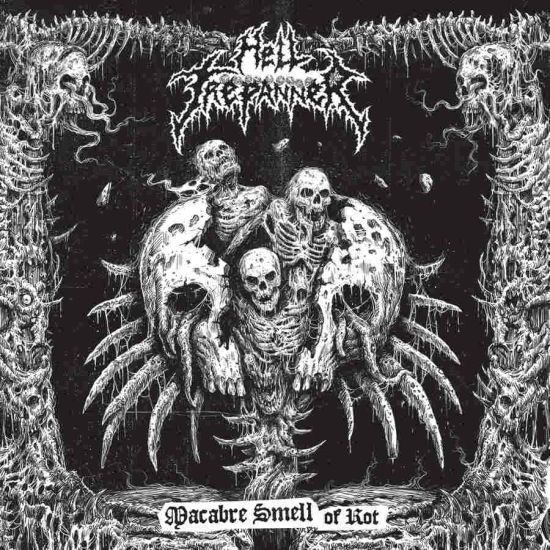 Macabre Smell of Rot combines this Peru death metal band's 2017 promo rehearsal demo and their 2019 split with Deshumaniszed, Towards the Diabolical Domains to form Macabre Smell of Rot. By the artwork you'd be able to figure the year these lads admire and if "1991" were the words uttered from your tongue, then you've guessed correctly. Finding Fallen Temple has been a treat so far, as it’s through the label I've been able to excavate some of the dirties though seemingly very competitive albums by bands that appear just as passionate as the ones on more notable underground labels.

Hell Trepanner (forgive me not mentioning earlier) with this compilation attires themselves with that old stain of antique death metal just out the wombs of thrash. Their 2017 promo leads the way in sculpting etch death metal of the time that through its thick and cloggy production helps in painting a convincing depiction of the sub-genre's earliest days. 'Sadistic Experiments in the Morgue' is balls-out death metal; pinch harmonics, thrashing leads, morbid gutturals, transitions to and from doom metal and up to standard drumming that retains some sloppiness, what’s not to like here. 'Trepanador Infernal' and 'Rotten Flesh Sacrifice' pretty much follow the lead as support for 'Sadistic Experiments in the Morgue', boasting music just as qualitative as the album opener and shine in their own ways.

The songs from Hell Trepanner's split with Deshumanized, have a slightly clearer and HM fuzzier vibration (in addressing production), but does not dismiss or delete the cornerstone attributes home to their 2017 promo rehearsal (which is quite impressive for a live recording). 'Into the Abysmal Depths' takes a few more steps into the doom metal territory, managing to inhale longer but is cautious enough to not get too bogged down by the dense and heavy tone as they would revert to thrashing customs of the genre's early form. 'Spirit of Serpent' is perhaps the most pissed-off track on Macabre Smell of Rot given the all-guns-blazing approach ensued, just listen to that guitar solo and the leads, this track sprints right through you. And if you can't resist pinch harmonics then 'Morbid Under the Spell' is where you need to be. Somewhat a combination of Hell Trepanner's best moments, the entry is all over the place using some thrash, death and doom to complete the incantation.

I expect to hear more good things from Hell Trepanner, provided the current global situation subsides sooner than later. Definitely a band to keep on the look-out for.