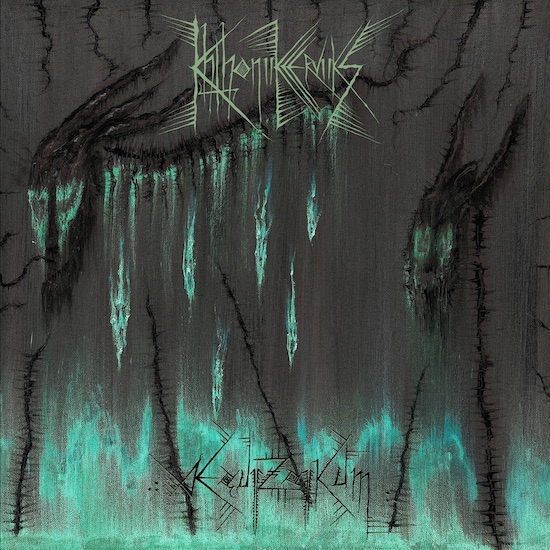 Pleasantly confused is how you'd feel once hearing this schizophrenic release of black/death metal. You won't know what hit you once you've started playing the latest title from Khthoniik Cerviiks, Æequiizoiikum. Frighteningly unorthodox yet enjoyable, the sum of the album leaves the listener within a domain of hysteria and delirium. No two tracks sound the same or are saturated with the commonalities of the genre. I don't want to say this is experimental, though it would be the obvious adjective; that word only dilutes what you get on Æequiizoiikum, however, the more applicable term would be fucked-up.

Just by the song titles I was beginning to question what Khthoniik Cerviiks were about to demonstrate and the artwork does not reveal too much or give any particular clear insight into what the heck this is, hence, the blind folded route seemed fitting.

Wasting no time to make the listener feel uncomfortable, an ambient piece 'KC Exhalement 4.0 (Welcome to HAL)' enters before 'Odyssey 3000' emerges from the misty labyrinth. Now wait for the surprise following its 2nd wave black metal structure. Spontaneous segments of altering guitar chords manifest in the catchiest of ways that sound like a spiraling descent into a vacuous realm. Still in shock and awe from the sudden flash of unorthodoxy, 'Æequiizoiikum (Mothraiik Rites)' appears immediately after and uses its melodious guitar structure to paralyze and reel in the listener before once again derailing the music by jumping into black/death/war metal territory.

Not to be mistaken for some haphazard jump around jamboree, though intrusive at times, the rhythmic diversions hold a decent amount of connection to the main riffs or structure of any selected song. Like a tunnel that has many routes that all lead to the same end, you'll find that applies, as the musical departure is often short lived and is quickly rerouted to the main song structure.

Khthoniik Cerviiks manage to keep up the sharp alterations through the flow and tuneful compositions, you'd rarely feel like there's a disconnect or filler used. I think that is the main strength of the band aside from being able to conjure a poisonous atmosphere. You'd get to 'Para-Dog-Son - Demagorgon' and 'Kollektiing Koffiin Naiils (Délire des Négations Sequence 1.0)' and fail to realize you're nearly at end of the record due to how well the band offers a reward in each entry; there's always some element that occupies your interest, inturn creating a false sense of time. Khthoniik Cerviiks are true geniuses at confluxing such diverse tempos and rhythms into sensible compositions. Whether they be irate or calm the band does an exemplary job of musical amalgamation.

Æequiizoiikum is similar to a quadrilateral equation/problem handed out by your professor that seems simple at first glance but upon attempt you quickly realize the many sub-levels that have to be traversed before acquiring the correct answer.