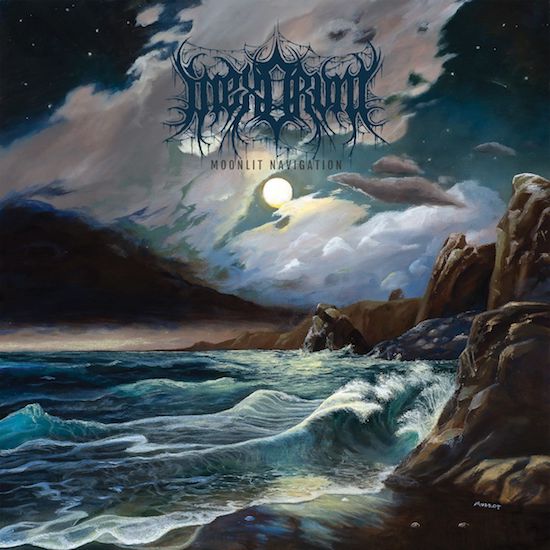 I have to admit that I'm a sucker for melodic stuff, doesn't matter if it's death, black, deathcore/metalcore or any other subgenre. So, as soon as I heard this album for the first time I knew I would be going back to it often. And I've been listening to it a few days in a row and maybe even like it more than on the first run.

First of all, it's worth mentioning that the band consists of only two guys - Matthew Kirkwold (Bass, Harsh Vocals, Keyboards) and Carl Skildum (Guitars, Clean Vocals, Keyboards, Drum Programming). And yes, they have programmed drums, but not the kind of Limbonic Art, where you hear it almost immediately, more of a sound that was started by Devin Townsend on "Addicted" album, where you hear some odd crash cymbal and start thinking about it. And it seems that guys at West West Side Music did a really good job with making it sound good, so it's absolutely not spoiling the whole experience at all.

This production is somewhere between melodic death and melodic black metal, but with a lot of proper heavy metal harmonies, melody lines and short solos. Some elements reminded me of older Cradle of Filth albums, but generally there's something very European about this production, because some other parts for example bring to mind catchy bits from God Dethroned's last album. Or some melody lines, like in 'Ouroboric State' remind of staccato used by Helloween. I like the variety of Matthew's growling and shrieking, Carl's clean vocals also add the kind of atmosphere comparable to Emperor albums. And again, this is another album that I enjoy blasting on my speakers because of those melody lines present not only on choruses but also throughout all verses that just went through my ears straight into long-term memory storage in my brain.

I can't think of any weak point of this album, each track has something different to offer, there are tracks filled more with black metal, some others have more death. There is even an opening of 'Signal Fires' which sounds very "rock" to me, but as soon as the song develops there are a lot more flavours. The opening track has almost thrash metal feeling, 'The Breaking Point' has a bit more keyboards than the other tracks, with a calmer passage in the middle of the song, ending with fantastic combination of fast blast-beats, one of those haunting melodies, keyboards and brilliant female choirs done by Sarah Roddy. 'Dream and Memory' is probably the first track which made me sit down and try to remember the band's name, album's title and start browsing for some more info. 'Wild Magic' is the only instrumental track, played on classical guitar, which prepares for 'In Desperate Times' closing the whole album with another mixture of very catchy melodies, impressive riffs and ending with very heavy metal harmonies.

Each track for me is like watching a cook preparing my pizza, who adds a bit more cheese, then a bit more of bacon, and then even more cheese and even more bacon. Need I say more?