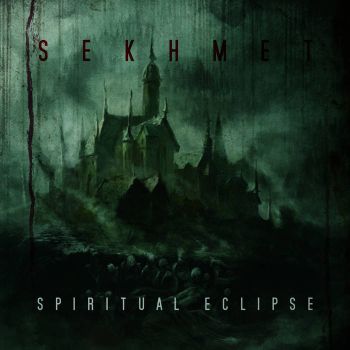 14 items are listed in the discography of Sekhmet and exactly zero reviews have been written for them. That’s surprising in view of the class of Spiritual Eclipse. I admit that the album is my first point of contact with the dudes from the Czech Republic and maybe their further outputs are not worth discovering. But this is beyond my imagination, because their fifth full-length sounds mature and experienced, but also energetic and wild. Moreover, it can be proud of its name. Right from the start, just listen to the stage-setting intro, Sekhmet do not hesitate to present a really very dark atmosphere and the spirit of pristine black metal haunts through the entire material. The dense overall sound animates the misanthropic feeling that characterizes the subgenre. Sekhmet draw the audience more and more into the abyss. In its best moments, their riffs have a mesmerizing effect. 'Enforced Discipline', for instance, glitters with merciless guitars during the mid-paced parts – not to mention the force they create after the band has accelerated speed. The song boasts with this encompassing approach that every black metal masterpiece should have. It gives the audience no chance to escape the sound experience. No matter which direction the listener turns, the song is already there and from this it follows that this track – additionally ornamented with a short yet expressive guitar solo – marks the climax of an exciting A side.

Sekhmet have an eye on the great role models of the genre. The quintet loves high velocity and some hammering sequences lie in close proximity to a lot of Marduk tracks (and so it comes as no surprise that a cover of the Swedish death squadron closes the album). 'Die for Your God' nearly sounds like a leftover from Hakan Morgansson’s music-stand. Other songs show discreet cross-references to the outstanding Mayhem debut from 1994. But that’s absolutely okay, because it is almost impossible to perform “true” black metal in a loyal manner without crossing the territories of a few legends. Rarely it happens that the high-speed rhythms do not give the guitars enough room to develop their full aroma, but the big picture does not lack coherence. Generally speaking, the production avoids any form of noteworthy deficiencies. The guitars have a dark touch, the throaty voice is not too dominant, and the drums do not lack vigor. 'Fanatical Worship', an excessive mid-paced highlight with a formidable main riff, illustrates the full force of the production impressively.

Final note, I have seen a German website that hates Sekhmet for being Nazis. As mentioned above, I am not familiar with their previous works, but Spiritual Eclipse does not show the smallest iota of a crude political attitude. Excerpts like “fat of their vile bodies shall melt in fire” are surely dubious, but not an isolated case in a scene of violent, “Christ-raping”, social-Darwinistic or just sick lyrics. Furthermore, one must know that some self-declared do-gooders in Germany have the only hobby to blame other people for not following each and every left-winged statement. Thus, I enjoy and recommend Spiritual Eclipse without guilty conscience. Let’s take it for what it is, a more or less excellent black metal album (with a great artwork, long live the vinyl format), even though the songs of the B side cannot fully maintain the quality of the album’s first half.