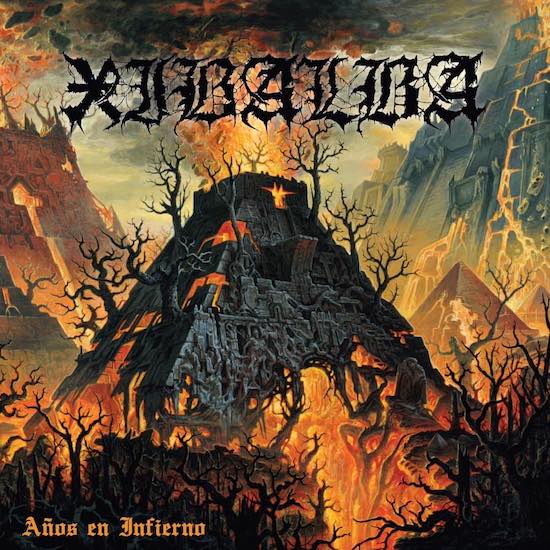 Anyone blessed with the slightest gift of an interest in today's growing heavy hardcore scene will surely recognize Xibalba as one of the already established bands with a solid release catalog. Talking about such a giant, it's for sure that you don't have to suffer a lack of professionalism in their musicianship when you listen to their stuff.

As one of the biggest enemies of intros and as someone who would like to start a petition to ban them permanently, I definitely can't say that I was impressed by the synth intro, which resembled the atmosphere of the horror movies of the 80s. It was just annoying, and I can't really explain what such a piece of kitschy noise does on a record so deeply rooted in punk. Fortunately, it doesn't take more than twenty seconds before the sonic attack of the first track 'La Injusticia' begins.

The good news is that there is a decent layer of doom metal to be found here. Admittedly, metallic hardcore is not really known for its melodies for obvious reasons... there aren't any. The doomy vibes build up an atmosphere which is a pretty good way to make the whole album sound darker and more sinister, adding extra quality to the dominant energy- and aggression-driven sound. The vocals are barely understandable, very raw, and are somehow in the midfield in terms of power and vocal range. Although I'm almost one hundred percent sure that if I had heard them outside of this musical context they would come in and out through my ears like shit, the simple fact that they fit the music completely makes the whole experience quite enjoyable.

I can't get around the fact that this album is just primitively said quite heavy. The riffs vary mostly from slow, doomy parts to death metal riffs in medium tempo with occasional drifting to even faster tempos. Low tuned guitars and absolutely successful cooperation with the drums seem to be the formula of these guys. You can hear their best on the rather punky riffs, whereas drummer Jason Runes does an incredible job with his perfect timing and a quite pleasant fast rhythm. The elements that are associated with hardcore are absolutely masterly executed and are definitely the more pleasant side of this release.

Despite the fact that the technical execution is almost perfect, there is one big problem. The guys tried their best to create something new from track to track, and in the end, they succeeded, but the doomy elements, which surely are a nice element of the whole from time to time, come at the expense of a strong reduction of the pacing, which made the whole thing quite forgettable at some points. There are tracks like 'Saka', in which nothing interesting happens for almost two minutes, and this isn't just an isolated case. This could have been a flawless release, but the lack of ideas at certain points cannot be ignored and it strongly disturbs the whole listening experience.

Nevertheless, this is still an above-average release with some highlights like the groovy punk parts. I would definitely recommend getting this album or at least checking out the tracks 'La Injusticia' and 'El Abismo II'. And now stop wasting your time with trivial things like reading and listen to some metal.