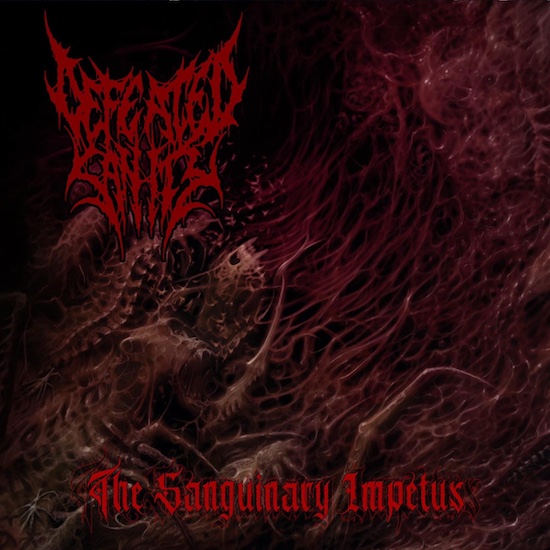 Even though this band's musicianship is extremely tight and their releases were recorded in the digital era with state of the art technology, I would say their riffing is still pretty oldschool and focuses primarily on the aggression, evilness and obscurity inherent in death metal but with more intense tempo changes and lower tunings; that’s where the brutal part comes in. Another aspect I love about this band is how organic it is, even in the studio. Almost every sound they display on their records is generated by the actual instruments. Take for example The Sanguinary Impetus intro: an uptempo drum roll, as simple as that. The only editing you can hear is when the drum roll fades out and the noise from the whole band interpreting the first song fades in, the rest of the album features an ultra dry, every instrument is upfront in the mix, as if you were hearing the band rehearse in a small room. The modern twist I mentioned, besides the traditional Defeated Sanity trademark sound. A band with such a strong personality in its sound will seem authentic even if it changes its style like they already successfully did on Dharmata. The second half of their previous album are the glimpses of electronic and robotic resonations that came from the slap bass figures included in some passages of the album’s single 'Propelled into Sacrilege' and the guitar harmonics that accompany them.

The opening riff from the first song also sounds fresh and different but then it goes back to the remarkable use of polyrhythms by the band’s drummer; the riff might be written on a quaternary metric but he is blasting on triplets. Mathematically possible even if it's awkwardly sounding and asymmetrical it is displeasing… but so neatly executed it is delightful, like watching an exploitation film. This entanglement of contradictions is what makes Defeated Sanity the best brutal death metal act in the world. The quieter parts include hits on the rim of the snare and delicate cymbal figures thrown to bedizen the jazzy walking bass lines and that crazy shit they often include on their compositions.

Finger picked bass guitar delivered by Jacob Schmidt is always a pleasure to hear, glad to know he’s still kicking ass. On the verses and most repetitive and fierce parts he follows the guitar riff but every time a drum fill kicks in or there are abrupt tempo changes, you might expect a fast sweep picking lick thrown over the 6 string fretless and deep low end instrument; some harmonics and the aforementioned slap part were also included. The guitar work is very rhythmic and completely riff oriented. There are pinch harmonics and sweep picking leads thrown here and there but songs never build over high pitched guitar wankery; even if the riffs themselves are so technical and syncopated it’s insane. This is the first full length with vocalist Josh Welshman and well, the guy certainly delivers deep gutturals and sounds completely full of hate. As a fan of the band I’m completely pleased by the uncompromised return of the updated trademark sound of my unsung BDM heroes. As a fan of extreme metal and instrumentalist I like to see how boundaries are still constantly being pushed further in terms of what can be possibly done by humans with instruments on the beginnings of the A.I. era. Do yourself a favor and spin this right now.