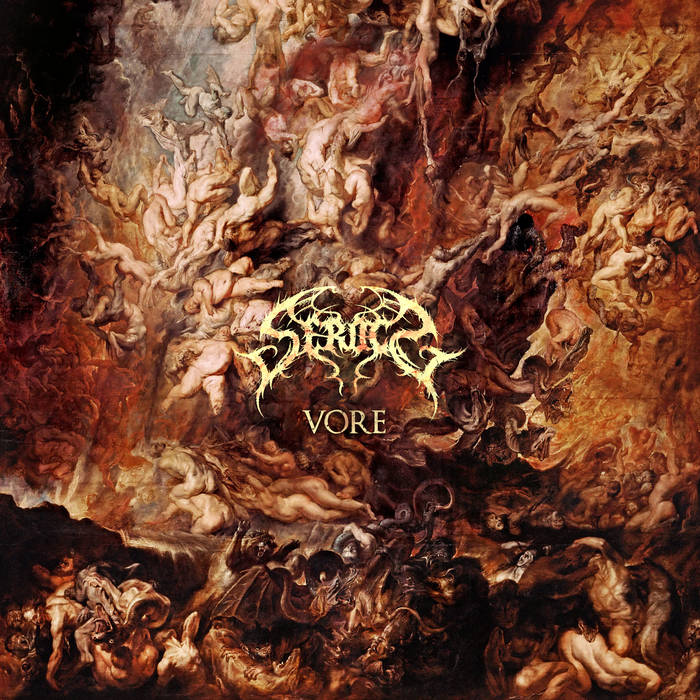 As the “dominant” species in the third rock from the sun, we humans have been in a constant struggle between keeping civilization going and creating our demise. Empires have risen and fallen and our current society is speedily going towards extinction. We are a zero-type civilization and the horizon looks blurry each day, leading us to be the virus, the cancer of earth. After the album The Phobos and Deimos Suite Serocs strikes once again the technical brutal death metal scene with an EP called Vore. This EP deals with the theme of humans as devourers of everything on the planet and us causing our obsolescence.

Serocs' sound hasn't changed much from their previous effort. The band keeps up with the blasting and technical brutality in the drums, fast and intricate riffing, techy bass lines, and horrendous guttural vocals. In my view, this EP serves as a way to perhaps include songs that were not into The Phobos and Deimos Suite for x or y reason and also as a teaser for what's to come shortly. The production, writing style, and instrumental attack is kind of similar to previous efforts. The only thing I can say changed a bit was that the guitar passages are more melodic than before. Of course, without sacrificing aggression and technique.

Vore is composed of 7 tracks in which 2 previous versions of their 2011 demo were included ('Nihilus' and 'Anthropic'). I have to say that the new versions of the demo songs are sounding brutal enough to justify their existence in this EP. By the way, those are instrumental versions, no vocal parts included. Anyways, let's get into the other 5 songs. The EP opens with 'Anthropic', this track starts with a short mysterious intro that quickly builds into the main riff, which is rhythmic, melodic, and catchy enough to keep your headbanging. The bass is prominent and pulsating, something that most of the time doesn't happen in technical brutal death metal bands. The bass usually gets buried into the mix and is just relegated to breakdowns and slow parts. Speaking of slow parts, there is only one moment to get your breath back in this EP; 'Shallow Vaults' is a brief instrumental that bridges 'Building a Shrine Upon Vanishing Sands' and 'The Temple of Knowledge'. Apart from the small interlude, you will only find frantic blast beats and complex guitar sections.

As I already mentioned, Vore is a demonstration of the inhuman technique in all the instruments, and is not about showing off how fast they are or how brutal. It is about how coherent and cohesive you are with the concept you're displaying. 'To Self-Devour' closes the butchery consistently, keeping up with the melodic guitar moments along with the EP as well as with the technical parts shown in the bass and drums. This is by far my favorite song of Vore due to the leitmotif drawn in the guitars that makes that track catchy, labyrinthine, and aggressive. A perfect closure.

Concluding with my review, I just want to say that Serocs has been a very consistent act since the beginning of their career. Throwing competent material into the scene, this band takes their time to release smart music into a sub-genre that tends to be repetitive and sometimes dumb. So folks, it is time to self-devour your brains and spin Vore, a very interesting and decent piece of technical brutal death metal from the band Serocs.