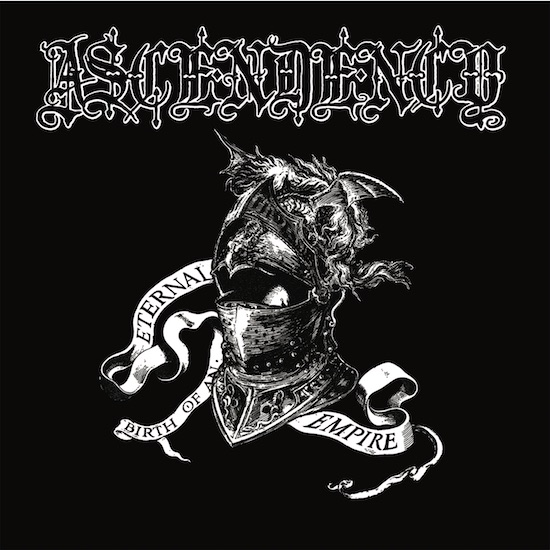 Scheduled for an Iron Bonehead reissue on vinyl and CD after its success on cassette and digital formats, the 2nd output from Ascendency, Birth of an Eternal Empire, puts itself amidst the bruises and broken bones of black/death metal with a 2nd wave nimbus of bleakness hovering above its head. If that's inadequate to draw you in then would you feel better knowing that the band hail from Denmark and features Simon Daniel Larsen of Phrenelith who has also had time performing for Undergang live? I take it by now you're interested, but that's not all. Also, a member of Ascendency, is drummer Ugur Yildirim of the death metal band Taphos that put out a masterclass showing on their debut full-length album, "Come Ethereal Somberness". I take it by now you probably want to throw money at Ascendency, and I can't grudge you for that, it's understandable and warranted.

Birth of an Eternal Empire is black/death metal proper, whispering Beherit-like vocals, scaling guitars (very Dark Funeral or Thulcandra inspired leads), steady drumming and shuddering yet coronating atmospheric moments overlook the rise to power. Fittingly only four yet lengthy songs, the EP has an aggrandizing feel achieved through this, but more through the music itself. Shorter songs being 'Altered Beast' and 'Tread the Path to Supreme Veneration' get to the point fast despite their 5-minute run, while longer tracks like 'A Birth in Fire' play like theme music to an awakening to some omnipotent god or force. Easily hooked in from the beginning via the riffing, it forces the listener to sit through all that is Birth of an Eternal Empire. They're these tranquil moments that appear suddenly and lay a warm blanket over the hot 2nd wave black metal riffing. Not too often utilized but done enough with adequate changes in tempo to prevent a bland overcast. The production is somewhat sharp like they initially tried for a clean sound, but instead of appearing too friendly/accessible, it adds a violent coating to the album, therefore making the record more convincing as a black/death metal endeavor.

There's more that can be done with a formula of this sort, its left to Ascendency to decide how they wish to conduct themselves from here on out. They attracted the attention of Iron Bonehead with Birth of an Eternal Empire, but it will be more interesting to hear what they put out on the label exclusively. You might want to keep your sword within reach in preparation of a powerful premeditated attack soon to follow.