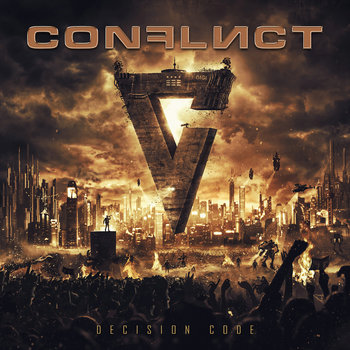 For a split second there I thought that UK anarcho punks Conflict had released a new album but as it turns out this is a Russian act that play, according to their bio, industrial death metal. Yeah, I kinda see where they’re coming from, but to call this death metal? That’s a bit of a stretch in my opinion.

Industrial metal is a pretty tricky thing to pull off this day and age. The genre had it’s heyday in the 90’s and not all of it has aged that well. Listening to this, I’m thinking primarily about an act like Psyclon 9 making a crossover with “Digimortal” era Fear Factory, and this is not a good sign. I’m not a fan of Fear Factory’s post 1995 output, aaaand … I’m not a big fan of what the Russian Conflict does neither.

There isn’t a whole lot of threat emanating from this outfit. They miss the militaristic stomping beats that make acts like Suicide Commando or Pouppée Fabrikk so great and they lack the aggression and brutality of bands like Godflesh, Skin Chamber or Sonic Violence as well. The band exhaust themselves with lame “dun-dundun-dundundun” guitar parts (I refuse to call that riffs by the way) and the ugly specter of nu-metal pops its head up way too often. The clean female vocals conjure up images of the singers of Evanescence and Within Temptation and that isn’t something I’m really waiting for either. In the track 'Megapolis' we get a saxophone part and I suppose that it’s nice to know that Kenny G has had an influence on the Russian industrial scene, but not really. It gets extremely annoying in the song that has Burton C. Bell on it. It’s a dreary, slow piece of fluff that sounds like something that Linkin Park would have considered as brilliant. With the plinky-ploinky piano interwoven throughout the song and the vocal lamentation they have Bell doing, Conflict manage to thoroughly bore the arse out of me. The band pulls the emo card far too often and fail to establish the right atmosphere that their lyrical concept so badly needs. Add to this the way too slick production and you have your dud right there.

What I do appreciate on this album is the sampling and keyboards. These are reminiscent of 90’s Front Line Assembly and really add something to the further bland metalcore the band try to pass as death metal. The first song has its moments and the album closer manages to sneak in the only real heavy parts that this album could’ve used so much more of. These are the few points of light on a further way too cheesy and lame album.

I can imagine this album being primarily aimed at the Hot Topic and/or Asking Alexandria crowd and Conflict could find an audience there. I personally think it’s being released 20 years too late. In the year 2000 many would have considered this to be “the shit”.