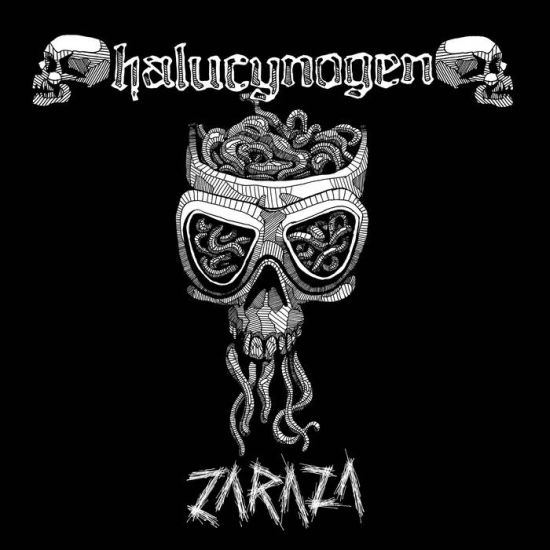 Halucynogen is a quartet from Rzeszów, Poland; which, despite its musical experience, is still on the threshold of its musical path. I discovered them now. They needed 14 years for the debut album to see the light of day. There are 13 songs on the album with a fairly prophetic title Zaraza and an intro, which - surprisingly neither opens nor ends the album, but with Zaraza all things can be the result of hallucinogens.

Encyclopedic sources indicate that these men are dealing with thrash / death metal craft. Titles: opening – ‘Trupi’ and ending – ‘Martwy’ basically confirm this deadly label. Although this marker is just a signpost. I assure you that Halucynogen has strongly surpassed beyond these two-dimensional frames with Zaraza. Undoubtedly, the core of it is a strong and juicy thrash maintained mainly at medium speeds, in which punk rock, death and black are intertwined nicely. ‘Why such a wide spectrum’ you ask? This is a good question, but its appropriate recipient should be Maniek - the leader of this quartet. I can only guess that all these genres have burned themselves into the hearts of the four. Maniek's musical past (Eskaton, Misteria, Mysteria) could also be a hint.

However, let's return to the music and especially to the one imprisoned on Zaraza. As I have already mentioned, the album begins with ‘Trupi’ track, i.e. a meaty Pantera influenced thrash with vocals balancing between death and black metal. ‘Negatyw’, ‘Zabójca’, ‘Upadły’, ‘Prorok’, ‘Terror’ and ‘Martwy’, are in similar style, although these seem more like Slayer / Machine Head type. ‘Psychoza’ brought back memories of old friends from Siekiera / Dezerter and Quo Vadis. The song is based on a punk schematic, and it’s only the vocals and the disturbing melody that transfer it to other regions. ‘Kłamca’, ‘Nienawiść’, ‘Obcy’ and ‘Rzeźnik’ with their motoric and ominousness are rubbing shoulders with death metal the most.

Sorry Maniek and co. for this highly comparative dissection of the album, but somehow it came out spontaneously. Do not recognize Zaraza as a derivative product for any reason. Of course, Hallucinogenians wade in the well-known metal swamp, but how they do it causes the leg and head to twitch for over 48 minutes. I think that concerts will be their greatest strength. Approachable song structure, melody and Polish lyrics will cause choral singing. I would love to undergo this Halucynogenic treatment myself, but we still have to wait a little longer.

The last word about the album concerns its physicality. 3-panel black and white digipak with a 12-page booklet. Edition adequate to the content, i.e. full professionalism, applause and respect.