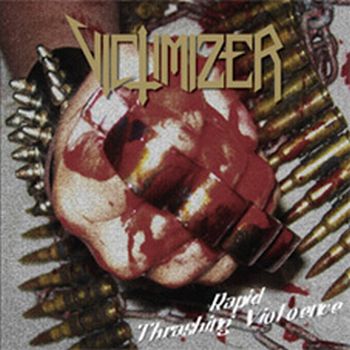 To err is human. I thought I get a cute four-tracker, but now here I sit with a CD, filled to the brim with 15 tracks – eleven of them are recorded live. Anyway, I think they are only relevant for interested groups and therefore I want to focus on the studio tracks that were the main reason for this release.

Each and every song title sounds like a fanfare ('Hell Made Metal', 'Victimizing Blitzkrieg' and so on), but what about the songs themselves? Of course, 'Evil Has No Boundaries' is beyond doubt, no matter which artists try to rape it and therefore I can even bear the feeble high-pitched scream of “J.Killheimer” at the beginning of this classic. Alas, already the opener shows impressively that our friends from Denmark are less competent songwriter. 'Hell Made Metal' is noisy and despite its primitive patterns somehow confusing, its guitar work sounds poor in view of its one-tone-approach and the lyrics are embarrassing (something like “God is still alive, but he won’t last long, metal is too strong”). The dudes want to demonstrate their sheer vehemence, but the result is pure noise, not at least because of the rather beggarly, vociferous production. It lacks clarity and precision and only its formidable harshness prevents a slap in the face of the sound engineers.

'Hell Whore' also falls victim to an embarrassing element. We are confronted with a painfully stupid intro – a dialog between a sleepy dude and the voluptuous hell whore (if I get it right) about the worst way of dying. Nevertheless, as soon as the music sets in, the band deserves praise for the relentless thrash to a certain extent. Just like 'Victimizing Blitzkrieg', the song is based on solid riffs, high velocity and an almost catchy chorus. Technical details do not play a role. This EP is no tribute to the rather gallantly fighting Bay Area pioneers like Forbidden or Testament. Instead, fans of Kreator’s “Endless Pain” and death thrash maniacs form the target group of this release. Decide for yourself whether or not two solid songs, a cover and a throwaway track are worth their price.

Finally, just a few words to the live recordings. The sound is very raw, live atmosphere is missing and many of the here offered tracks have also been released in regular studio versions. Thus, this section is only for those two or three people in the whole wide world who need every snippet of the Danish underground crew.