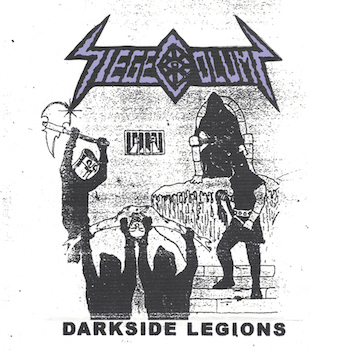 The outlaws are back in town, Siege Column that is. New Jersey's peace-defying parade of maniacs high on the thrill to kill and whisky. Back in 2018 they stormed through the city, harassing towns folk with Inferno Deathpassion, an album that was greatly overlooked due to so much happening at the time for underground death and black metal. But when starved of attention some bands only act out more violently, thus Siege Column reentered their lair to plan and execute their most vitriolic output to date, Darkside Legions. A thrashing surge of combative death metal featuring bottle breaking drums, whisky spitting vocals and high velocity, Tasmanian-devil style riffing. Altogether with and attitude that says fuck off and some samples of eerily played keyboard synth makes the visit all too ominous and nail biting.

Feel the sweat trickle from your forehead all the way down to your non-confrontational ass cheeks; posers retreat to their safe-spaces and cuddle in warm, fluffy sheets as the barbaric sounds of sirening-guitars and disastrous drumming lay a passage for the ring-leader to demolish the town with ball and chain throaty barks. Henchmen gather in support of the tyrannically adjudication instigated with opening track 'Devil's Nights of Hell', circling the listener whilst hooligans chant the deathspell. And bang! a shotgun of raw n' rugged death metal takes a pelt at the petrified.

Obscenities shouted, a cry for more barbaric demonstrations, and from the sulfuric tongue, 'Echoes from the Underworld' is provided. A mace-wielding, testosterone-drenched slob of medieval death metal completes with mayhemic guitars and rough-cut vocals; this joyride has just begun. Gratifyingly and suitably to match the ugliness of the title, 'Snake Skin Mask' hits like a warmetal brigade alongside a thrashing frenzy like a nomadic, once institutionalized, over medicated madman, diving dumpsters and upturning trash-cans. I mean what more brutal pieces can one think of than track titles and matching hymns such as 'Speed of Omen Winds' and 'Buried in Lava'?, those songs are downright mean and punishing. Not to mention how believable the musicianship backing them is. You get a crossfire of instrumental stalwart and prowess as a balance between sonic ferity and precision.

Written like royalty, the decree to pass judgement-on, and executed savagely by the swing of bardiche, mace and the tossing of mortars, Darkside Legions continues to advance further and more viciously with 'In the Stolen Tomb' and 'Gloves of Fire', both embodying and glamorizing the cover artwork accompanying the wild ride of a record. Amidst this predatory conduct, the songs here are seemingly more catchy than those of Inferno Deathpassion; the mid-paced groovy moments of 'Funeral Fiend', 'In the Stolen Tomb' and 'Buried in Lava', add a moody and melodic texture to the music also the efficient depth needed to translate the artwork on Darkside Legions.

The production used has not changed since Inferno Deathpassion, thus it has become one of the common grains used in the crafting of a Siege Column album. That said, their sound has a quality that stands out, it's easily recognizable which is a good asset to possess as to not get lost amidst the saturated scene. Apart from such, their production also matches the music they compose, and the themes expressed in their songs. Like a strange blend of urban decadence, deterioration and ancient dungeon-eque, primitive workings, Siege Column's music matched with THEIR production value has aided tremendously the band's identity and facilitated a basis for growth and development.