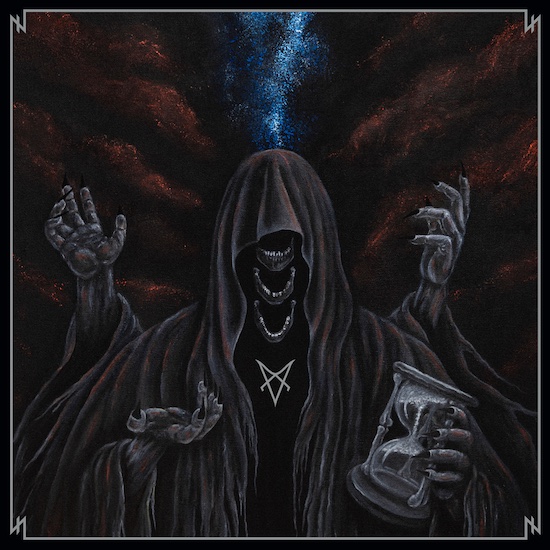 A snake! look!, advancing from the sea, its hiss and rattle inciting disturbia, its stare paralyzes, and its bite anoints the soul with evils old. Vassafor will consume you, extinguish the light from all corners of your soul and enslave your mind. This has been the story since comrades of Temple Nightside and the abominable Grave Upheaval first set foot on sanctified grounds. The excitement ushered in with the announcement of the band's next lethal installment, To the Death, is beyond measure. A one-hour ceremony in adoration of forces unseen but felt far too often to ignore or be deemed nonexistent.

Set for an August release alongside Temple Nightside's "Pillars of Damnation", To the Death strikes the listener as not only the most corrupt and spoilt fruits of Vassafor, but also a record within its own league of ritualistic death metal.

'To the Death' may be the best death metal song I've heard so far for the year. Its wicked, riffs are served up buffet style, and the drumming has so many variations it's impossible to have asked for more. I'm also interested in finding out who's the woman on the spoken samples, her presence ups the vilification on this track, though a bit of a seductress tone is emitted from her voice. Then starting out as a 2nd wave black metal march, 'Egregore Rising' transforms with a surreal movement into something more complex and unpleasant. Still with the touch of compositional adept and the vocal taint of the serpent merchant himself VK, it demonstrates Vassafor's long standing ability to go from strength to strength in-so following up a flawless introduction with a song equipped in all departments with the mighty ichor of Vassafor.

No disrespect, but To the Death makes bargain-bin black/death metal sound like Sunday-school church music. The fumes radiating from this thing are sickening; a twisted, contagious, pelting of obscenities indiscriminately. You aren't safe even when behind cover, the potency is much too strong to be evaded. Take 'Emanations From the Abyss' or the monolithic, 'Singularity', those tracks alone could squash the alleged 'efforts' of countless bands trying desperately to create worthwhile black/death metal. They form so innocently with hidden intentions to the naive, then like a serpent, they strike venomously with sections mustering only to exert their most vicious and instrumentally elevated compositions.

A shift occurs on 'Emanations from the Abyss', the vocals here are not the same as heard throughout the rest of To the Death, I really don't think these are VK's vocals, nevertheless they sound fitting considering how the overall tone of the album sounds starved of the bass, so the vocals slice instead of crush. Meanwhile, 'Singularity' escorts the listener through halls of horror, featuring strange ambient sounds of creatures it seems and a continuation of the splendid riff wizardry, execrable tongues and pestering drumming.

I've always had admiration for the distinction of the bands in that Australian and New Zealand circles being Grave Upheaval, Temple Nightside, Ill Omen and Impetuous Ritual. Each has a sound and method characteristic to themselves. These bands share members but have not forgotten to give each entity its solitary identity. Vassafor in particular takes the scenic route to their destination with releases jumping the boundary of 1 hour. Vocals nurtured within the stomach and uttered through the teeth and guitar riffs that straight slaughter. Their methodology sounds like they are trying intensely to decrypt the engraved sigils on some ancient artifact excavated from the depths of Egyptian soil.

At a point To the Death had been neck-in-neck with Malediction in terms of musicianship; however, better riffs pushed the material over the threshold of what the previous entry accomplished, thus making To the Death, Vassafor's best and most successful undertaking to date.

The tapestry of this ailing wanderer continues to hold dearly the keys to a dominion of unforgivable mischief guarded by Iron Bonehead Records.