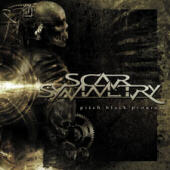 To make it short and to the point Sweden's Scar Symmetry second offering can be described as more melodic and more brutal than its highly acclaimed debut. At first those two adjectives might contradict each other but that's exactly what "Pitch Black Progress" is. On top of more memorable hooks and much catchier melodies this album is also more powerful and destructive. Both those aspects are integrated flawlessly and delivered by very skilled musicians that have no limits to styles, genres or instruments played. From brutal death metal riffs to melodic, memorable choruses and anything in between those five lads deliver one fantastic track after the other. Special recognition should be paid to the vocalist Christian Alvestam who switches from clean, melodic singing to sturdy growls effortlessly, in both cases delivering very powerful performance. It's only their sophomore release but Scar Symmetry already emerges on top of the genre, musicianship and originality sets them head and shoulders above the rest.